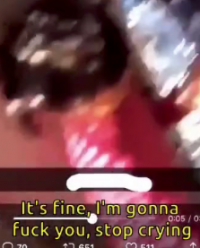 Subtitles (as verified by French speakers) show the men laughing and ‘talking dirty’ to the crying child, before she was able to run away.

EU Times The French Police have been trying to cover up the incident by removing all traces of this video to stop it from spreading online. There’s nothing graphic being shown, but the comments by the harassers are disgusting. About all the is known is that it happened in France in a children’s playground. The girl appears to be no more than 4 or 5 years old and the guy who filmed it was one of the Muslims who cornered the girl.