Muslims, yes, Somali Muslims, which is really ironic considering that Somalis comprise a lot of the Muslim gangs and sex gangs in the UK. 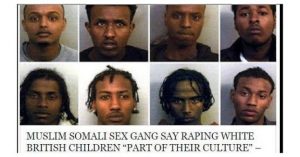