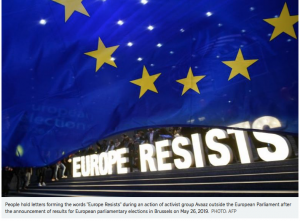 However, so far as  I’ve heard, the Center Left/Center Right parties still hold most of the seats (500+ out of 750) but the populist/nationalist (often erroneously referred to as “far right) have made significant gains and could disrupt the agenda of the EU globalists in Brussels. Also, the far left Greens in Germany did well.

Some of the early reports:

What the talking heads are saying:

Projected results as of Monday, 1:00 AM Eastern Daylight time: