Mehdi Hassan is a journalist and the former political editor of The New Statesman and The Huffington Post. 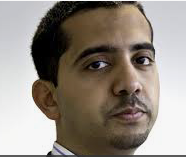