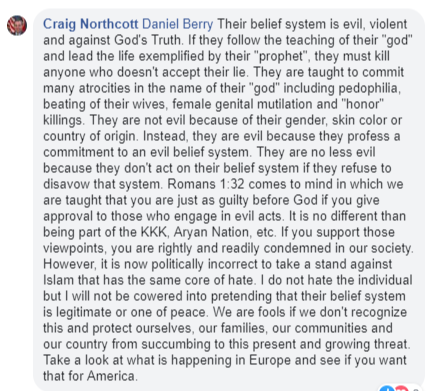 CAIR, America’s largest Hamas-linked Muslim litigation and pressure group, focused on securing special religious rights for Muslims and getting Americans fired for expressing their own opinions about Islam, has filed a formal complaint with the Board of Professional Responsibility of the Supreme Court of Tennessee against Coffee County District Attorney Craig Northcott over a series of alleged anti-Islam social media posts.

“As an elected official, Mr. Northcott represents a wide constituency with individuals who hold beliefs different than his own. This overt anti-Islam ‘racism’ (What ‘race is Islam?) calls into serious question his ability to fairly represent this diverse constituency. Claiming that following Islam, a so-called ‘peaceful’ religion practiced by 1.6 billion, is “no different than being part of the KKK,” a violent, racist hate group, is evidence that he cannot possibly act impartially. Mr. Northcott’s belief that all Muslims are evil precludes any hope for fairness.”

GOOD! Tennessee District Attorney doubles down, will NOT resign over his so-called anti-Islam social media posts as CAIR is demanding