MUSLIM woman files complaint claiming Dillard’s in Garland, Texas (where Pamela Geller’s ‘Draw Mohammed’ event was attacked by Muslim terrorists) for telling her that “no Islamic supremacist/oppressive headgear is allowed on the sales floor.” A complaint  has been filed on her behalf by a designated terrorist group CAIR attorney with the Texas Workforce Commission against Dillard’s. 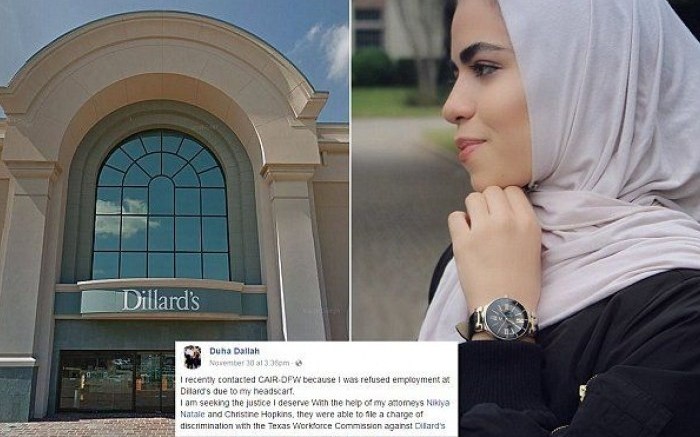 Dallas News  A Muslim woman who wears a headscarf for religious reasons says a Garland department store told her she couldn’t work there with her Muslim women’s headgear (hijab) on.

Duha Dallah was offered a sales position at the Dillard’s at Firewheel Town Center earlier this fall but was never contacted again after an additional interview on the day she was told she would be completing training, her attorney said. During the initial interview, the woman said she was told she wouldn’t be allowed to wear the scarf on the sales floor.

“This is completely unconstitutional,” attorney Nikiya Natale said. “It’s just a blatantly obvious case of discrimination.” (NO, it isn’t. Stores are allowed to have dress codes for sales personnel) 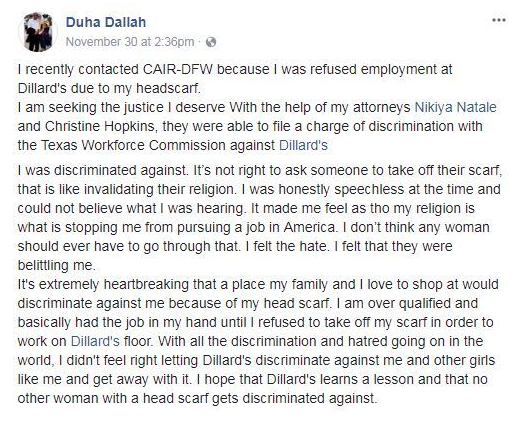 She said that during that meeting, the manager discussed pay and asked her to come in the next day to begin training. As their conversation was wrapping up, Dallah, who was wearing her hijab, said the manager told her that she could not wear her headscarf on the sales floor.

When she explained that she wore her hijab for religious reasons, the manager told Dallah about another Dillard’s employee who wears her hijab to and from the store, but removes it while working, according to the complaint.

When Dallah arrived for training the following day, she said she met with the store manager who conducted a second interview, during which Dallah explained that her religious beliefs require her to wear a headscarf, even at work.

“I believe I lost the sales position because Dillard’s did not want a Muslim woman wearing a headscarf to work on the sales floor,” Dallah said. (Exactly, they didn’t want to scare off/offend their customers)

Local Muslims organized a picket outside of the Dillards in Garland Texas to protest the store’s policy.

It is strongly believed that if the complaint had been resolved in CAIR’s favor CAIR would have certainly reported by now.  Thus, Florida Family Association makes this renewed call for people to urge the Texas Workforce Commission to reject CAIR’s complaint in the event it is still being investigated.

Florida Family Association (Floridafamily.org) has prepared an email for you to send to encourage the Texas Workforce Commission to reject CAIR’s complaint.

To send your email, please click the following link, enter your name and email address then click the “Send Your Message” button. You may also edit the subject or message text if you wish.

Click here to send your email to encourage the Texas Workforce Commission to reject CAIR complaint that attempts to force Dillards to allow hijab which exemplifies Islamist oppression.