Watch how Somali Muslim migrants are making their mark on Minneapolis. The “enrichment” just never ends. 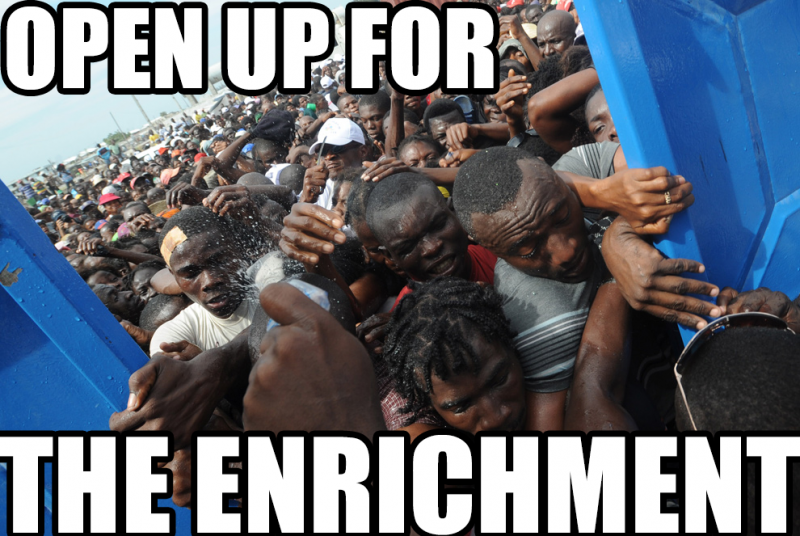 American Thinker (h/t Marvin W) On Wednesday, May 15th a couple of University students were attacked on campus at the East Bank Train station by two Somali thugs. It was an attempted robbery that the guys rebuffed sustaining injuries that required a hospital visit.

On Thursday, May 16th two Somalis burned down the pavilion at Lake Calhoun [or Lake Bde Maka Ska if you’re a virtue signaler) an eating and hanging out meeting place in the heart of the city enjoyed by generations of Americans around the prettiest city lake you’ve ever seen. This is in the most expensive neighborhood in Minneapolis.

On Friday, May 17th a gang of 10-12 Somali youths attacked all the white people at that same East Bank Train station with hammers and pipes. A person who claimed on social media to have been at the station when the incident occurred said that the group of males had “hammers and bars,” and that they seemed to be “attacking anyone who looked like they had money or were white.”

Tuesday, May 20th a woman walking her dog in a gorgeous, huge, wooded off leash dog park, complete with sandy beach on the Mississippi River, found spikes just off the path. Sharp metal objects taped to a wooden spike, presumably designed to hurt dogs running happily through the underbrush. Everyone knows that Muslims abhors dogs as unclean because the prophet Mo did.

In 2018 it was uncovered that Somalis had perpetrated a massive, community wide scam against the welfare state of Minnesota, stealing an incredible $100 million from a childcare daycare program by fraud and shipping that money to Somalia. The taxpayer money given to the Somali childcare centers “has been sent by individuals in Minnesota to Somalia or other foreign countries, and terrorists have obtained and used the money.”

The report is able to identify a serious rift between Minnesota’s Department of Human Services (DHS) and the CCAP. The CCAP manager of investigations identified more than 100 Somali daycare centers under review for fraudulent practices, pinpointing the fraud rate at 50 percent of the $217 million paid to these child care centers.

On Saturday September 22, 2018 at the ValleyFair amusement park in Shakopee, Minnesota, police and emergency responders had to evacuate all guests after a mob of Somali teenagers and men rushed through security and caused several violent fights to break out inside the park.

According to eyewitnesses who were at the park to celebrate Law Enforcement Appreciation Day, a group of nearly 100 Somali men mob rushed past security and amusement park staffers at the front entrance, and proceeded to run through the park and instigate fights among themselves and with guests. As several violent fights broke out, guests began to panic as reports of people being stabbed and shot began to circulate.

·      Dozens of Somalis, men and women, over the years arrested or tracked as they attempted to join terrorists overseas including ISIS. The feds are concerned it is still a rich breeding ground for Islamic supremacy and terrorist organizations.

·      In 2016 the first Somali police officer murdered a woman in her pajamas who had called in a disturbance. I guess it’s not safe to call the cops when you see something and say something. He has been found guilty of that murder.

·      In 2018 a Somali student at St Catherine University attempted to burn down the school and “hurt people,” saying, ““You guys are lucky that I don’t know how to build a bomb because I would have done that.”

·      In 2017 a Somali man stabbed a young woman 14 times for no apparent reason — he didn’t go after her purse — while she was walking home from her job at an Apple Store. He’s still at large. Curiously no composite sketch was ever released to the media.

·      In 2016 during Ramadan a gang of religious robed Somali men terrorized the city’s affluent Linden Hills community “for three straight days, threatening to rape a woman, beating one resident’s dog, and shouting “jihad!” as they drove vehicles over residents’ lawns and pretended to shoot people through their duffel bags. No arrests were made.” (Seriously read this account. You will find it absolutely horrifying and it’s shocking that no arrests were made with all these people trying to get license plate numbers, all the likely surveillance cameras etc. It makes one wonder if the city is protecting Somalis from being held accountable to our laws.)

·      In 2012 90% of Somalis worldwide said they think they agree with Sharia Law and think it should be implemented. But Ilhan Omar wears such pretty head scarves when she’s raising money for the Muslim Brotherhood.

Somali Muslim migrant gangs are a growing problem in Minnesota:

Star Tribune An investigation conducted over four days netted 58 Somalis for attempting to solicit children for sex or for trafficking, according to the Minnesota Bureau of Criminal Apprehension. Of those arrested, eight of the people arrested were from out-of-state, said BCA Superintendent Drew Evans.