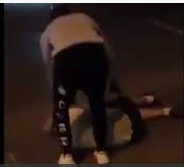 The young German man was standing next to the filthy Muslim, who was a speaking German. Don’t know if they knew each other or not, but the blow to the head left the man bleeding on the ground, screaming in pain.

Summit News (h/t Thereza B) According to the German government’s own statistics, violent crime in Germany rose by 10% between 2015 and 2016, when the country began accepting large numbers of Muslim migrants, many of them young men. More than 90% of the rise was attributable to young male Muslim invaders.  See video below.

Some more benefits of immigration (Germany) – He says ‘this is for Afghanistan’ pic.twitter.com/qc8i0yvkCG