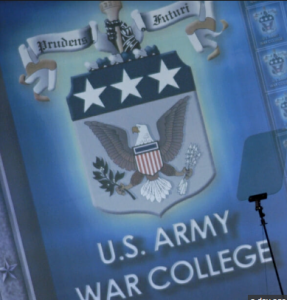 The US Army War College (USAWC) has just surrendered to the demands of the Council on American-Islamic Relations (CAIR)—an “unindicted co-conspirator,” to quote the U.S. Dept. of Justice, in the largest terror funding case in American history, and a designated “terrorist organization” for nations such as the UAE.

Raymond Ibrahim  The June 19, 2019 planned lecture on my book, Sword and Scimitar: Fourteen Centuries of War between Islam and the West at the US Army War College in Carlisle Barracks was canceled due to a CAIR-induced hysteria that focused on presenting me—a native Arabic speaker of Egyptian/Middle Eastern descent—as a “racist” and “white nationalist” who is out to incite American soldiers to murder Muslims. 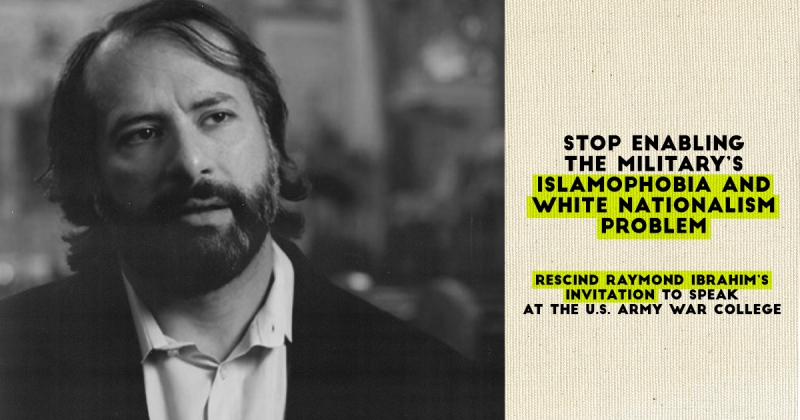 Although the USAWC claims that the event has been “postponed”—and that CAIR’s smear campaign had nothing to do with its decision—what really happened, along with the troubling lessons learned along the way, follow:

Mr. Ibrahim: On behalf of the Director and Staff of the U.S. Army Heritage and Education Center (USAHEC), I am honored to invite you to speak as part of the USAHEC’s 2019 Perspectives in Military History Lecture Series.  …   [W]e would like you to speak about your new book, “Sword and Scimitar.”  The Perspectives series attracts a wide audience including the U.S. Army War College students, faculty, and staff, ROTC cadets, Soldiers from regional military bases, university students and faculty, and the general public. 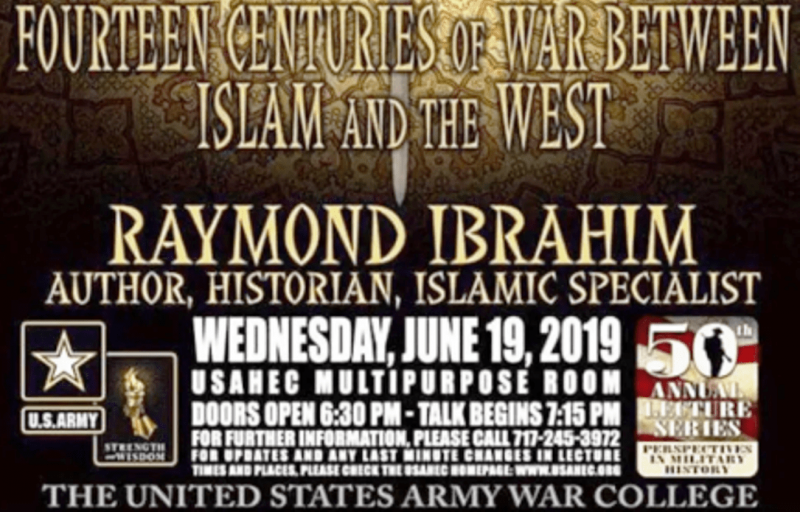 “On a personal note,” the author of the email added, “I think your new book, and a lecture based on it, will resound very well with the primary audience of our lecture programs—the students and faculty of the U.S. Army War College.”

After I accepted the invitation, my USAWC contact reiterated: “I am excited to book you, I think your topic will be perfect for my audience.”

Aside from a few more exchanges on dates and logistics, that was that—until CAIR got wind of the event.

I’ve already discussed what initially happened: how the leadership of CAIR’s Penn. chapter sent a letter on May 28, 2019 to USAWC Commandant Gen. John Kem and Provost Dr. James Breckenridge, urging them to cancel my event because “Raymond Ibrahim’s book …  advance[s] a simplistic, inaccurate and often prejudicial view of the long history of Muslim-West relations which we ﬁnd deeply troubling”; and how CAIR did not once cite a single sentence from my 352-page book to support their accusation that it “is based on poor research.”

After media outlets began reporting on CAIR’s displeasure with the USAWC, the latter called and assured me that the event was still on.  I also received a June 5, 2019 email from my USAWC contact saying, “We are good to go for the lecture.”

Then CAIR and allies took off their gloves and got nasty.  If a formal, ostensibly rational sounding letter of “concern” would not suffice, then hysteria would have to do.

On the very next day, June 6, 2019, CAIR issued a number of screeds, including a Press Release and a petition addressed to the USAWC by Linda Sarsour’s Islamist group, MPower Change.  The overall theme is that, if the USAWC goes ahead with my planned lecture, the “racist” military will get so riled that American soldiers will randomly begin to massacre Muslims at home and abroad.

Please sign this petition that calls on US Army War College in Carlisle, PA to drop an Islamophobic speaker who fuels hatred and misunderstanding and is scheduled to deliver a lecture at the college in two weeks.

The following excerpts from the MPower petition are typical; note especially the last paragraph (bold and underlining in the original):

In a time of rising white nationalism, Islamophobia, and horrific violence stemming from these ideologies, the College is endorsing and fostering anti-Muslim hate within the military by inviting Ibrahim….

Ibrahim’s rhetoric … normalizes and justifies violence against Muslims, which is already a burgeoning problem for the military…..  Let’s tell the U.S. Army War College: If you don’t rescind Ibrahim’s invitation and denounce his Islamophobic rhetoric, you’re not only endorsing anti-Muslim hate, but dangerously nurturing Islamophobia and white nationalism within the military.

Just a few days ago, California Rep. Duncan Hunter—who ran an explicitly Islamophobic campaign for Congress—casually admitted that he and his unit “killed probably hundreds of civilians…probably killed women and children in Iraq.”

Tell the U.S. Army War College: Ibrahim’s lecture would push the same kind of incendiary, Islamophobic rhetoric that has led to violence inflicted on Muslim communities—both in the U.S. and abroad.

In the midst of their lies, CAIR and MPower repeatedly present me—an Arab-American whose parents immigrated from Egypt to evade Islamic oppression—as a “racist” associated with “white nationalism.”  But as the Investigative Project on Terrorism, which maintains a comprehensive dossier on CAIR’s shady and terrorist links, observes:

Being a “white nationalist” doesn’t mean having European ancestry in Linda Sarsour’s world. Her group, MPower Change, joined the Council on American Islamic Relations (CAIR) Philadelphia chapter in charging that Raymond Ibrahim, an American Copt of Egyptian ancestry, whose people have been severely discriminated against under Islamic rule for centuries, is a “white nationalist.”….  To classify Ibrahim in the same category as white supremacists who hate Muslims for being non-white is to show ignorance of the severe persecution and discrimination faced by the Coptic people under nearly 14 centuries of Islamic rule.  Copts face constant discrimination and persecution at the hands of their Muslim neighbors … [including] Jim Crow-style conditions in their homeland.

Also like the original CAIR letter of May 28, 2019, the MPower petition repeatedly asserts that “his recent book, Sword and Scimitar: Fourteen Centuries of War between Islam and the West, advances an Orientalist and inaccurate view of Islam,” without once showing how; it merely claims that “His simplistic and flawed version of history—riddled with prejudiced stereotypes of Islam—espouses a dangerous agenda that demonizes Muslims.” (As noted here, however, professional historians and scholars specializing in the field of Muslim-Western history think otherwise.)

Regardless of the baseless and hysterical nature of CAIR’s and its Islamist allies’ allegations, on June 10, 2019, the US Army War College caved in to their demands and canceled the event.  In my last phone call with the USAWC on that same day, I suggested a compromise: turn my lecture into a debate, and pit me against any academic of CAIR’s choosing.  Even though I was under no obligation to make such a concession, it still wasn’t good enough for the USAWC.

Perhaps the most dishonorable aspect of this entire fiasco is that, in a vain effort to save face and pretend that the prestigious United States Army War College is not surrendering to the demands of a notorious Islamist organization—whose subversive tactics and terroristic ties are well documented (here, here, here, and here)—the USAWC’s official story is that my lecture has only been “postponed,” and not because of CAIR’s demands.

As a June 10, 2019 report notes, the USAWC’s decision to “postpone” the event “comes in the wake of strong opposition from the Muslim community to the previously scheduled appearance of author Raymond Ibrahim.  The Army War College on Monday, however, suggested that the postponement had nothing to do with the outcry from the Muslim community” (emphasis added).

Reality is clear enough: for the USAWC suddenly to postpone a long-planned event only nine days before schedule—and just a handful of days after CAIR’s smear campaign—is not a “coincidence”; it is a clear message for all.

Incidentally, the USAWC is now learning that once you give CAIR an inch, like all bullies it will demand a mile.  Consider: in CAIR’s original letter, Jacob Bender, its Philadelphia executive director, actually conceded to my lecture, with one caveat, which he requested in all politeness: “We would ask that if Mr. Ibrahim delivers his talk that we be allowed the same format to put forth counter points to his arguments.” 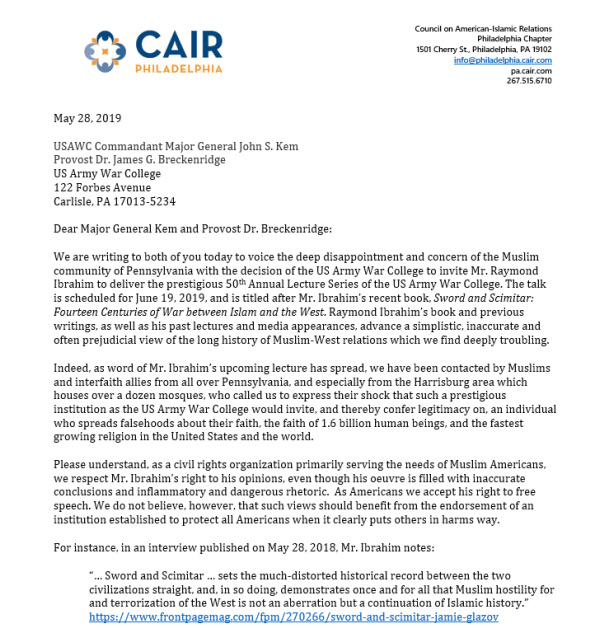 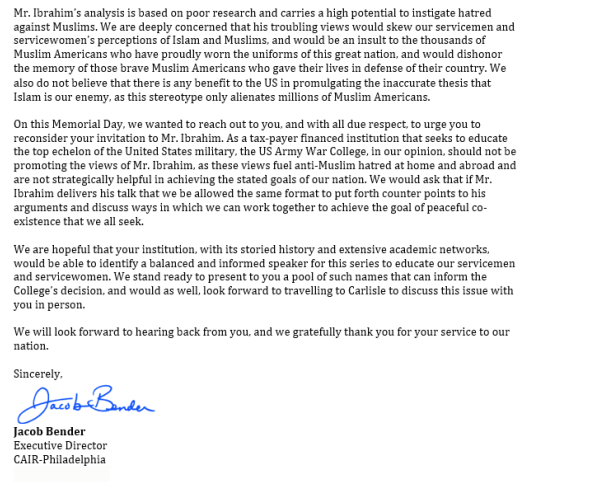 Even though the USAWC completely acquiesced by canceling the event altogether, CAIR—having smelled blood—has since become more aggressive and abusive to the military.  After gloating over the USAWC’s capitulation, the same Jacob Bender who would’ve been grateful just to have the opportunity to “put forth counterpoints” to me (though only after I was gone and no longer there to respond), is now asserting that:

The statement [to “postpone” the lecture] by the College spokeswoman falls short of repudiating Mr. Ibrahim’s racist views. A postponement is not enough—the college should reject hate. We will continue to advocate for … [the] exclusion of anti-Muslim racist theories in the college’s programming…. [W]e are ready to provide an alternative viewpoint and suggest a pool of academic analysts who can provide an objective assessment of military and historical perspectives to the US Army War College community.

Watch Jacob Bender, a Jew, working for an Islamic extremist group, defending Islam after the San Bernardino mass shootings by a Muslim:

In other words, if the USAWC really wants CAIR to stop verbally terrorizing it, canceling my lecture is only the first step; the USAWC must next invite a Muslim apologist to come and present a history opposite to the one I was going to present—that is, the usual pseudo-historyof an “evil” West that has long victimized a “progressive” Islam, hence “why they hate us,” and why we—in this case, the USAWC—have to appease them, etc., etc.

The grand lesson of this entire debacle should be disheartening for all who care about this nation.  If an ethnic Egyptian and native speaker of Arabic, with verifiable credentials, whose extended relatives continue to be persecuted because they are Christian, can be characterized by Islamist groups with terror links as a “racist” and “white nationalist”; and if, of all places, the US Army War College, as opposed to the average “liberal” college, can so easily capitulate to such patently deceptive tactics—the true motives of which are to keep the actual and troubling history between Islam and the West concealed from the military—know that the hour is late indeed. 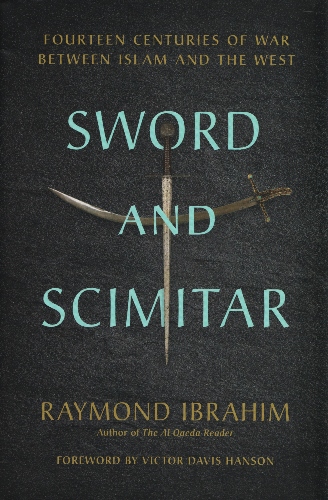 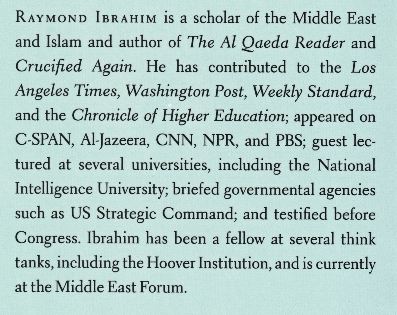 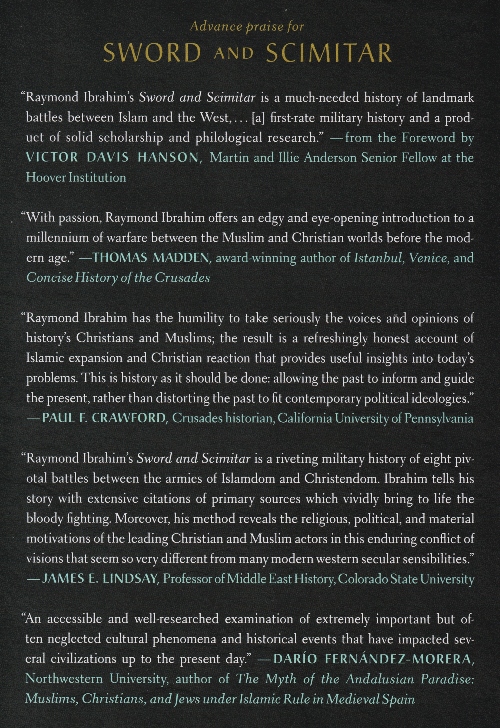 Raymond Ibrahim interviewed by CBN News about his new book ‘Sword and Scimitar.’