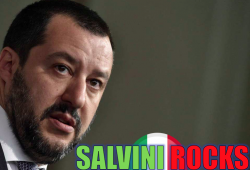 Italy’s Interior Minister/Deputy Prime Minister Matteo Salvini has called a Netherlands-registered German NGO boat a “pirate ship,” stating the 43 rescued African (mainly) Muslim illegal alien migrant wannabes aboard should instead be taken to The Netherlands or to Germany. They will never be allowed to dock in Italy.

Newsweek NGO Sea-Watch is challenging Italy’s refusal to allow its Sea-Watch 3 boat entry to its territorial waters or to dock at the port in Lampedusa, an Italian island in the Mediterranean around 160 miles off its coast, in the European Court of Human Rights, which has asked for Rome to justify its decision. 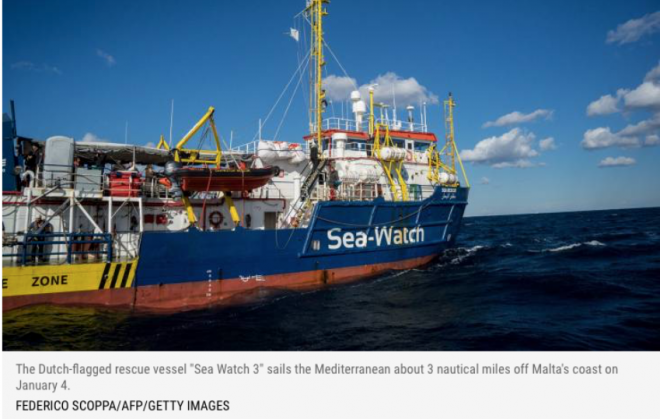 Sea-Watch “saved” the illegal aliens from the sea (most likely from an illegal human trafficker boat) near Libya on June 12, but they are stuck in the water because of Italy’s Salvini-driven policy of not allowing any more NGO ships to dock without permission. Those that do face fines of up to €50,000.

“Does the European Union want to solve the Sea Watch problem? Easy,” Salvini, leader of the League party and interior minister in Italy’s fragile coalition government, wrote on Facebook. “Dutch ship, German NGO: Half of the illegal migrants in Amsterdam, the other half in Berlin. And seize the pirate ship.”

Salvini argues that his country has taken in too many of the illegal migrants picked up by rescue boats, and that only a tiny fraction are genuinely fleeing war. He had already once refused entry to Sea-Watch 3, only to have the decision overturned by the ECHR in May.

Sea-Watch 3 landed at Lampedusa with the 65 illegals it had rescued from a rubber dinghy in the waters off Libya before the ship was impounded for three weeks. It was then released back to the NGO by Italian authorities.

Those at the coalface of the Mediterranean crisis, such as Italy, feel they are overburdened and that the problem is not shared equitably among all E.U. partners, as demonstrated by Salvini’s insistence that Sea-Watch 3 should be the responsibility of the Dutch and Germans.

Those at the coalface of the Mediterranean crisis, such as Italy, feel they are overburdened and that the problem is not shared equitably among all E.U. partners, as demonstrated by Salvini’s insistence that Sea-Watch 3 should be the responsibility of the Dutch and Germans.

Meanwhile, those onboard Sea-Watch 3 are struggling in difficult conditions. A video posted to Twitter by Sea-Watch shows one man, Hermann, who the NGO says escaped torture in a Libyan prison, saying the group is exhausted.

“We cannot hold and longer. We are like in a prison because we are deprived of everything. We cannot do anything. We cannot even walk, go a bit further, because the boat is small and we are plenty. There is no space anymore,” Hermann says. (Oh, Boo Hoo. Where are the women and children? Why are there only strapping young men aboard?)

Seven days ago Hermann addressed the Europeans to call on their solidarity. So far the situation worsened for the 42 people still stuck on the #SeaWatch 3. Having escaped the Libyan torture prisons, the EU deprives them of their basic human rights for 12 days now. pic.twitter.com/8qDZjQYbJk