Oh, Boo Hoo…got your tissue box handy? There are days when the loneliness is too difficult to bear for Ramez Alghazzouli. On those days, the 30-year-old business analyst is forced to call in sick from work.  “It is hard to breathe when I feel like I failed to make my spouse happy,” Alghazzouli told HuffPost. “It’s an awful feeling. Thinking about it puts me under pressure and in a depression.” 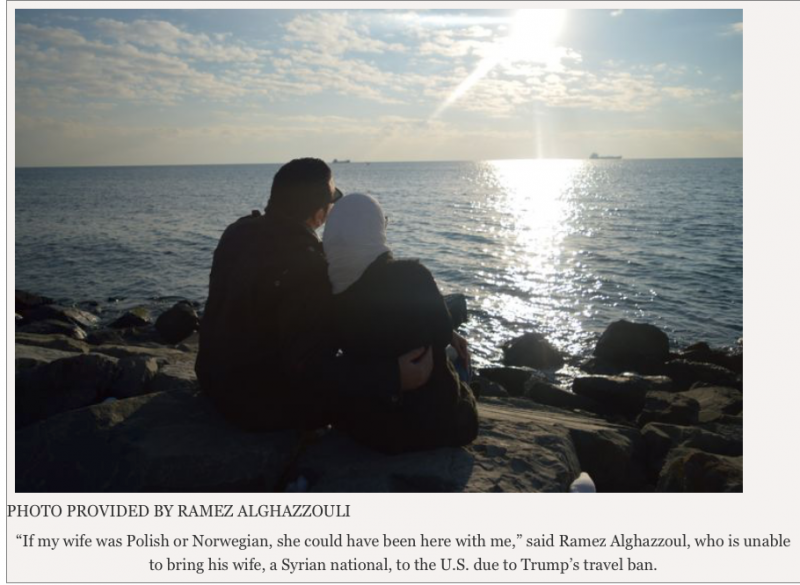 Huffpost For 3 years, Ramez  Alghazzouli has fought for his wife. But Trump’s Muslim Ban continues to keeps them apart. (Well DUH! Ever think of going to live where she is?)

Alghazzouli and his wife, Asmaa Khadem Al Arbaiin, 27, are Syrians forced to live thousands of miles apart. Al Arbaiin, an English student who is stuck in Istanbul, Turkey, is banned from entering the U.S. due to the Muslim travel ban. Next month is their third anniversary, but the couple said it’s impossible to celebrate.

A year ago Wednesday, the Supreme Court upheld President Donald Trump’s travel ban on several Muslim-majority countries in a 5-4 vote that threw the lives of thousands into chaos.

The third version of the ban, which has been in place for over two years, has torn families apart, denied civilians from seeking medical treatment in the U.S. and even forced some Americans to make the difficult decision to leave the U.S. and move to war-torn countries to be with their families.

In 2018, more than 37,000 visa applications were rejected by the U.S. State Department due to the ban. Human rights organizations and politicians have strongly condemned the policy, calling it discriminatory. According to the State Department, only 5% of visa waivers were issued between December 2017 (when the third version of the ban went into effect) and March 2019.

“This is what makes me mad, makes me angry and disappointed. It’s just because of my wife’s religion and nationality,” said Alghazzouli, a green card holder who petitioned for his wife in 2016. “If my wife was Polish or Norwegian, she could have been here with me.” (Exactly!) 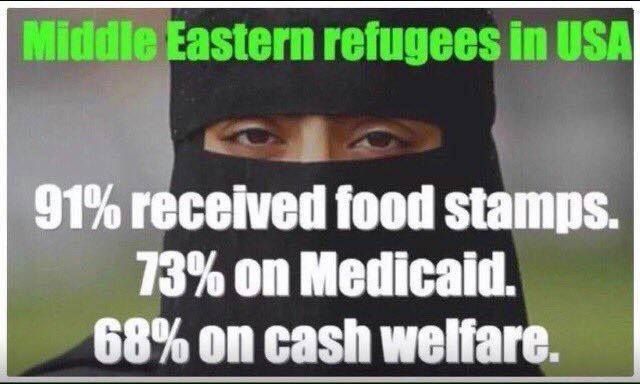 Raised in Syria, Alghazzouli and his wife have known each other since they were childhood friends in Damascus. The war in 2011 scattered their families around the world. Alghazzouli headed to a college in Mesa, Arizona, and the rest of his family moved to France, Qatar and Denmark; Al Arbaiin’s family moved to Istanbul. (So, go to Istanbul where you will be welcome)

Alghazzouli, a business analyst for Arizona’s Department of Economic Security, based in Tempe, petitioned for his bride to join him in the United States after they wed in 2016 so the couple could begin their new lives.

But their plans were halted in 2017 when Trump signed an executive order that barred citizens from seven Muslim-majority countries, including Syria, from traveling to the United States. At first, Alghazzouli was not worried, he said. He was convinced that if the couple followed the law, the two would be reunited in no time. After all, Al Arbaiin was an educated woman, a law student before the war broke out, fluent in English and in no way a threat to the American people. 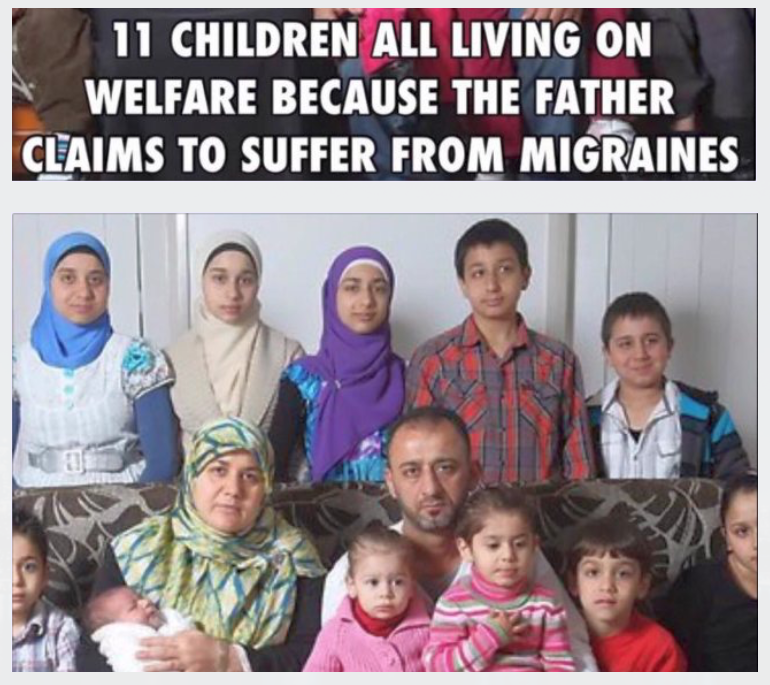 But he was wrong. Despite being eligible for a waiver –– the legal clause added by the Supreme Court that allowed exceptions for citizens who were able to prove hardships, meant to prove that the ban was not discriminatory –– Al Arbaiin was not granted a visa.

“I just feel like I’ve been treated like a second-class citizen,” Alghazzouli said. (You ARE because you’re not a citizen of the U.S.)  “This is my basic right to have my spouse with me, to start a new life.” (In Turkey or Syria or any of the other 56 Muslim countries

“This was just one example of many that point to the fact that both in intent and in application, the Muslim ban is exactly that –– it’s a ban on Muslims,” said Kristin Garrity Şekerci, the senior research fellow at The Bridge Initiative. 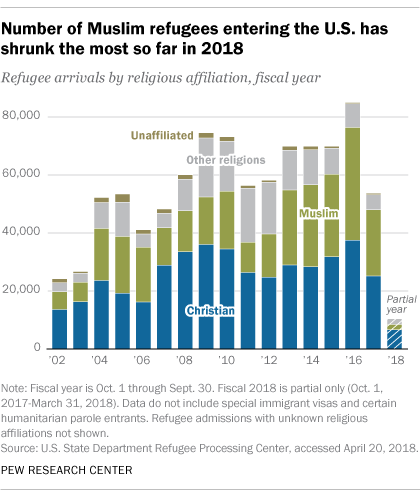 Just last year, the Cato Institute, a public policy think tank, noted that Muslim refugees arriving in the U.S. dropped 91% (YES!) between fiscal years 2016 and 2018. Out of the total number of refugees that were admitted into the U.S. in 2018, only 17% were Muslim, compared to 66% of refugees admitted who were Christian.

“It’s a discriminatory, prejudicial policy that uniquely targets and impacts Muslims because they’re Muslim,” Garrity Şekerci told HuffPost. (Yes, it does, thanks to President Trump)

The goal of the database, which was collected through publicly reported stories, is “to reveal the systematic harms that this policy has caused, and to articulate the findings to the public,” according to the website. 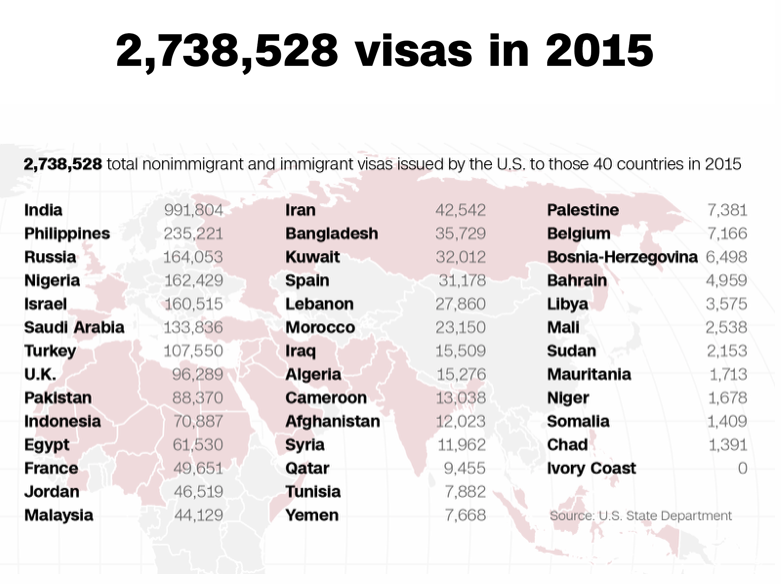 Back in Arizona, Alghazzouli has exhausted every legal route available to him. He has emailed U.S. Citizenship and Immigration Services, both of his Arizona senators, the White House, the State Department, the U.S. Embassy in Turkey, the National Visa Center and the Department of Homeland Security.

Alghazzouli has also read the presidential proclamation multiple times and has every government website memorized in hopes of finding a solution.  “I can start my own legal service office,” Alghazzouli joked, pointing to the fact there isn’t a resource out there he hasn’t read. 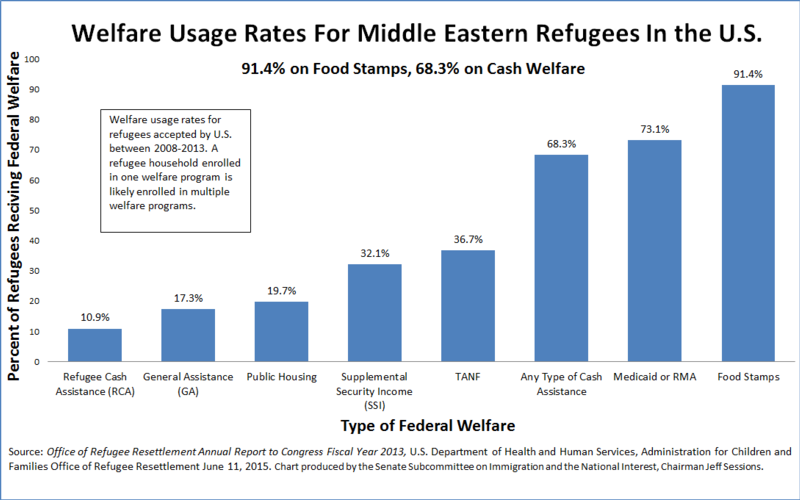 But none of this information has gotten him any closer to reuniting with his wife. Instead, Alghazzouli is struggling more with each passing day trying to understand a law that has caused him so much agony.

“All the time that has passed, it’s not coming back and it’s all because of my wife’s nationality and religion. That’s it. There’s nothing else,” said Alghazzouli. “Unless someone is able to connect to my nerves, they won’t feel the pain that I feel every night and every day.” 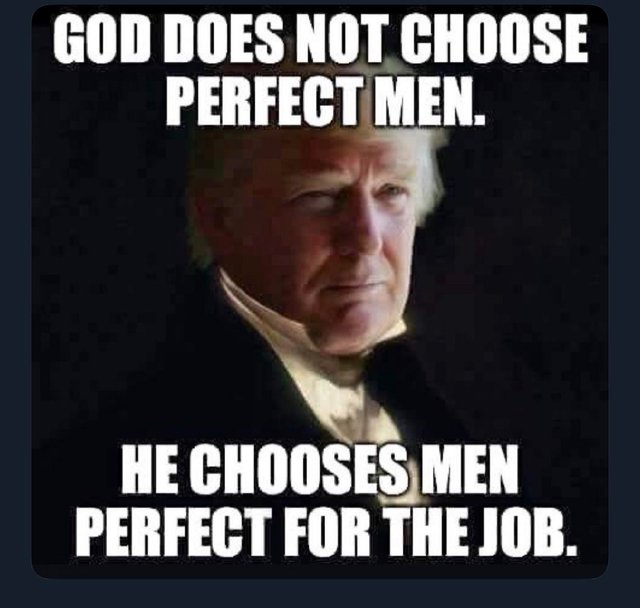