The mother of a student at the Spanish River High School, with one of the largest Jewish populations in the state never expected the response she got when she wrote to the principal asking about the teaching of the Holocaust. In an email reply, Principal William Latson explained that the lessons are “not forced upon students as we all have the same rights but not all the same beliefs.” 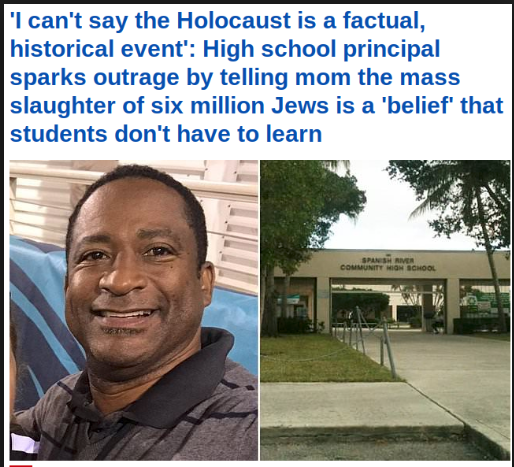 Palm Beach Post Was the principal of one of Palm Beach County’s largest public schools, a 2,500-student campus west of Boca Raton that has one of the county’s largest Jewish student populations, suggesting that the Holocaust was a belief rather than an actual event? Thinking Latson simply had expressed himself poorly, she wrote back, asking him to clarify his comments. “The Holocaust is a factual, historical event,” she wrote. “It is not a right or a belief.”

She expected a chastened response. Instead, the veteran principal doubled down.

“Not everyone believes the Holocaust happened,” he wrote, according to email records obtained by The Palm Beach Post through a public records request. “And you have your thoughts, but we are a public school and not all of our parents have the same beliefs.” (Does anyone know how many Muslims are in this school?)

“I can’t say the Holocaust is a factual, historical event because I am not in a position to do so as a school district employee,” Latson wrote. 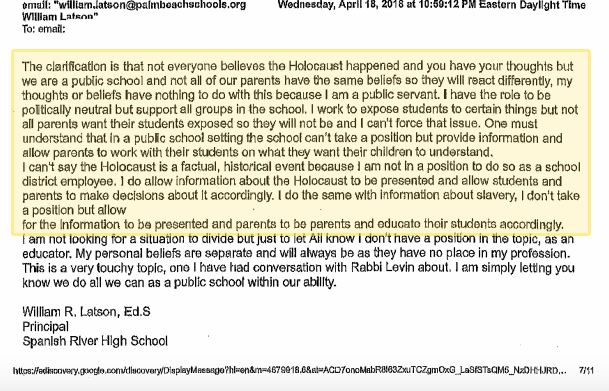 The mother didn’t doubt that Latson knew the Holocaust was real, she said in an interview, but she feared his reluctance to say so stemmed from a desire to avoid confronting (Muslim?) parents who deny the Holocaust’s reality.

Denying or minimizing the Holocaust is described even by the far left Southern Poverty Law Center, an organization that monitors hate groups, as “an essential manifestation of anti-Semitism.” Why, the mother wondered, would a lifelong educator cast a historical fact as a “belief” to appease anyone? (Muslim pressure?)

This caused a small furor in the school district’s upper ranks, which had to grapple with whether and how to admonish a longtime principal of a high-performing school for his troubling statements. But it ultimately left the mother frustrated, alleging that the school balked at putting in place some educational reforms she suggested and did too little to hold Latson, the school’s principal since 2011, accountable for his words.

In a statement to The Post, Latson apologized for the way he expressed himself in his emails, saying it was not indicative of his actual beliefs or regard for historical fact. He pointed out that Spanish River High’s educational offerings on the Holocaust exceed the state’s requirements.

The Holocaust is taught, he said, in ninth- and 10th-grade English classes, as a component of U.S. history and world history courses, as a separate elective course.

But the mother wasn’t satisfied. She told Latson her child had informed her that not all of the supposed educational efforts were carried out in the classroom. She asked that teachers be required to document their Holocaust lessons and readings. The suggestion was initially embraced, she said, but ultimately ignored.

While the mother said district administrators agreed to implement the teachings in required courses at the school , during the past school year, they failed to do so. Read More

I guess we can thank the two new radical Congressmuslims for making Jew-hatred acceptable in America now. 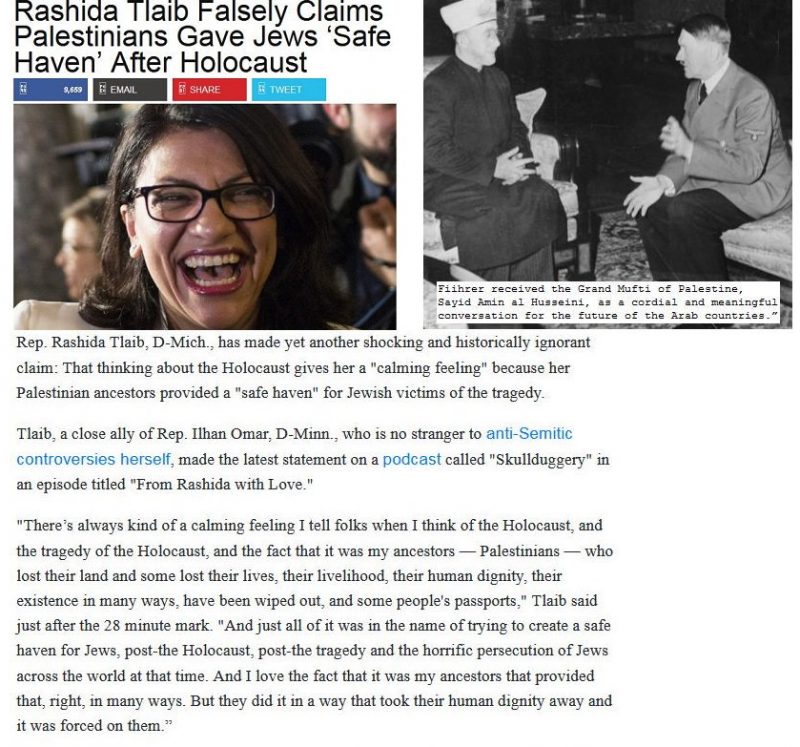