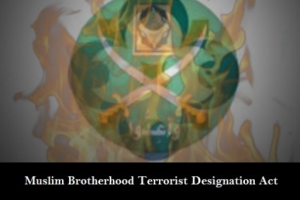 This latest push for the designation appears to be the result of Trump’s recent meeting with Egyptian President Abdel-Fattah el-Sisi. “The president has consulted with his national security team and leaders in the region who share his concern, and this designation is working its way through the internal process,” White House press secretary Sarah Huckabee Sanders said in May. 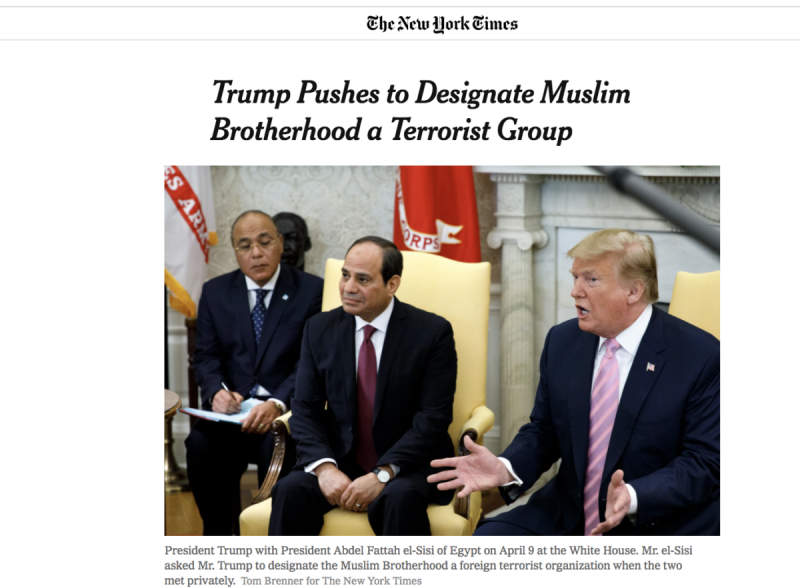 Be sure to watch the video at the end where Muslim Brotherhood leaders publicly admit that their holy grail, with the assistance of their North American and European front groups such as CAIR, is the overthrow of the U.S. government and establishment of a global caliphate.

FortuneBut do the actions of this nearly century-old group support such a designation? The Washington establishment says “no.” 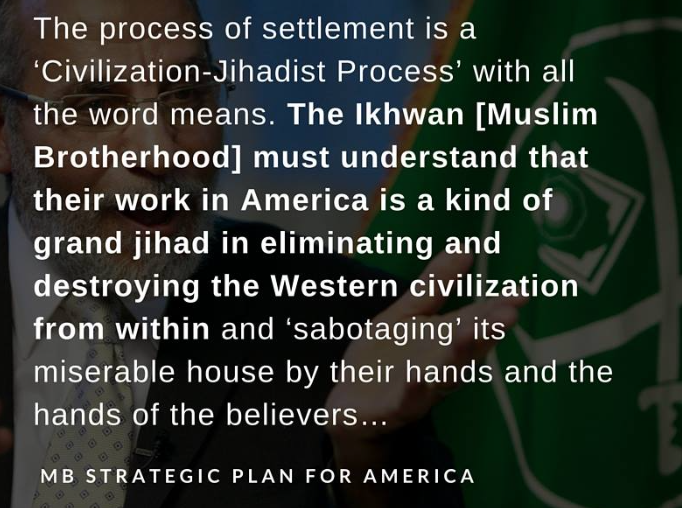 The biggest obstacle in meeting these criteria is that the Muslim Brotherhood is not a singular, cohesive body. There are some offshoots, such as Hamas in the Palestinian territories, that have in fact engaged in acts of terror. Hamas, and a handful of others, including two splinter groups from the Egyptian Muslim Brotherhood, are already designated terrorist groups.

The Trump administration has not clarified whether its designation would apply to the Egyptian Muslim Brotherhood or the broader network across the region. But the reason that el-Sisi, and some of his allies in countries such as Saudi Arabia and the United Arab Emirates would want the designation is clear: they see the group as a threat.

Following the overthrow of Egyptian President Hosni Mubarak in 2011, Mohamed Morsi became the country’s leader and the political party associated with the Muslim Brotherhood won nearly half of the seats in parliament. El-Sisi, a former general, helped lead a coup in 2013 to depose Morsi and has since overseen the arrest of thousands of members of the Muslim Brotherhood.

Under his rule, el-Sisi has sought to pressure the U.S. and the U.K. to designate the group a terrorist organization, but they have repeatedly refused. The Bush and Obama administrations found a lack of evidence to support the designation. A December 2015 review by the British government came to a similar conclusion.

And the so-called Swamp “experts” are in agreement:

William McCants, a scholar of militant Islamism at the Brookings Institution, wrote back in 2017 that “the Brotherhood as a whole, in several different respects, does not meet the criteria for designation under the statute. That’s why, despite pressure from governments like Egypt and the UAE over a protracted period of time, it has not been designated to date under any of the previous three administrations.”

Daniel Benjamin, the former coordinator for counterterrorism at the State Department, agrees. “State looked at this in 2017-2018 and concluded there was no legal basis for designation. That continues to be true. The admin is again, as with the IRGC move, warping the process for political purposes. It’s malpractice and ultimately dangerous,” he wrote on Twitter.

“We can disagree on whether the group is bad, authoritarian, illiberal…but on the specific issue of whether they meet the criteria for being an FTO, a foreign terrorist organization, the argument and the evidence simply aren’t there,” said Brookings senior fellow Shadi Hamid.

Washington Post columnist who was killed in the Saudi embassy, Jamal Khashoggi, a Muslim Brotherhood associate himself,  put it in even starker terms in a piece he wrote just months before his murder: “The eradication of the Muslim Brotherhood is nothing less than an abolition of democracy and a guarantee that Arabs will continue living under authoritarian and corrupt regimes.”