The “hate” comments were written in the Facebook group “Stand up for Sweden” and contained material that was deemed to have broken Swedish law against threats or intimidation towards ethnic groups, Swedish broadcaster SVT reports. 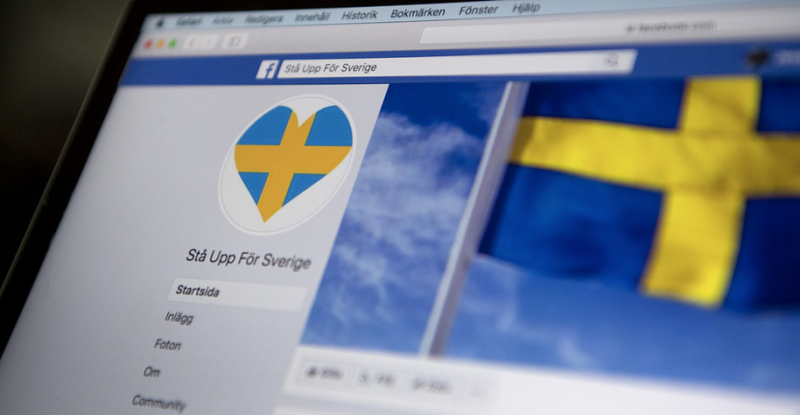 Breitbart The 52-year-old, who was the administrator of the group, was found guilty of breaking the BBS Act of 1998, according to news website Nyheter Idag, which held him liable for not deleting the anti-migrant comments made in the group, even though he had not made them himself.

Should the case not be overturned by appeal in the supreme court, it will be the first conviction under the law. The 52-year-old denied having committed a crime saying that he had not even seen the comments that were highlighted and it was noted that the group has around 162,000 members and saw three million comments per year.

A witness from the NGO Juridik Fronten (Legal Front), a group which engages in“opinion-forming activities related to nationalist right-wing populism and violent offences”, claimed that they had sent a pdf file of hate comments to the defendant.

The man claimed that he had not opened the file, telling the court he did not open attachments from people he did not know and therefore had not seen the comments.

The case was reported to police initially by the online social justice activist group Näthatsgranskaren which has been touted as being responsible for a rise in investigations and prosecutions for online hate speech in Sweden.

The group was founded in 2017 by former police officer Tomas Åberg who described the group’s work in 2018 saying: “We have developed a programme that searches for criminal networks on social media by searching for keywords, combinations of words, and phrases that can constitute criminal acts.”

Åberg also admitted the majority of those reported were elderly men and women, including a 70-year-old man who was convicted earlier this year after being reported to the police by the organisation for writing on Facebook that Somalis were”lazy”.

Europe Reloaded Breitbart London reported that the actions of Näthatsgranskaren were driving the rise in prosecutions for hate crimes in Sweden and that the average age of those prosecuted was 55, with many of those being targeted of pensionable age.

The overstretched Swedish police still have the manpower to go after pensioners for exercising their free speech: 65-Year-Old Swedish Woman On Trial For ‘Hate Crime’ Describes Intensive Harassment from Police.

While Säpo is assuring the Swedish public that it will do “even more” to limit the growth of terrorist environments in Sweden, the Swedish government is exacerbating the problem by welcoming returning ISIS fighters back into the country. Approximately 300 people left Sweden to fight for ISIS and it is estimated that approximately 150 Swedish ISIS fighters have returned to Sweden. Approximately 50 of those who didn’t return were killed.

The head of Säpo, in January, had described[1] returning ISIS fighters as “broken people who have been traumatized by their experiences” and said that Swedish society has to “play a big role in re-integrating them”. [2]

Swedish law does not allow the security services to take all necessary measures against returning ISIS fighters, even though a relatively new law, meant to address the problem of terrorists in Sweden, was adopted in 2016.

The law does not allow authorities, for example, to seize or search the mobile phones and computers of returning ISIS fighters, unless there is a concrete suspicion of a crime, according to Fredrik Hallström, deputy head of Säpo‘s unit for “ideologically motivated actors.” Furthermore, according to Hallström, the authorities do not know whether the returning fighters constitute a danger or not to Swedish citizens: “It is also difficult to answer because the assessments we make can change”.

Apparently, turning in fellow Swedes to the authorities for alleged “hate speech” is now viewed in Sweden as “heroic.” 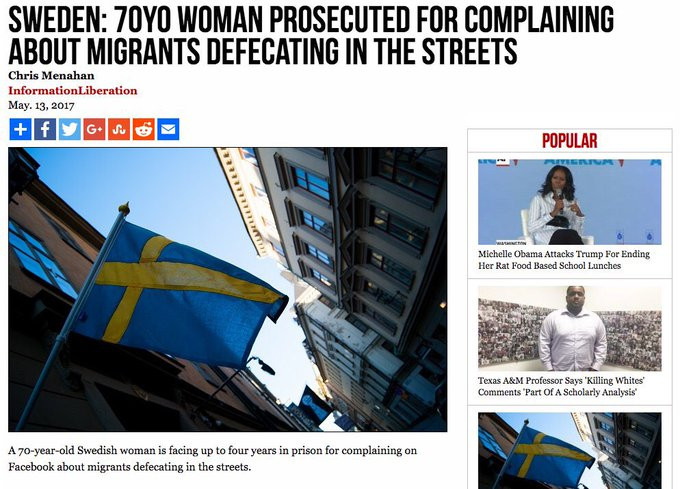 Gatestone  According to the Swedish mainstream media, the country has experienced a significant rise in prosecutions for “hate speech” on social media last year. The organization believed to be largely responsible for this rise is “Näthatsgranskaren” (“The Web Hate Investigator”), a private organization founded in January 2017 by a former police officer, Tomas Åberg, who has taken it upon himself to identify and report to the authorities Swedish individuals whom he and his organization decide are committing thought crimes and “inciting hatred” against foreigners.

Åberg’s organization reported no fewer than 750 Swedish citizens in 2017 to the authorities for “web hate”. According to Aftonbladet, 14% of the reported cases went on to prosecution of which about 7% — 77 cases — led to actual convictions. Most of the people identified and reported by the organization were middle aged and elderly ladies. “The average age is around 55 years”, saidÅberg, “Young women almost do not appear at all”.

Åberg was recently nominated for a prestigious prize, the “Swedish Hero” award, by one of Sweden’s largest newspapers, Aftonbladet. Since 2007, the newspaper has awarded the “Swedish Hero” prize every year “to everyday heroes who have shown bravery, civil courage and human compassion”. Apparently, turning in fellow Swedes to the authorities for alleged “hate speech” is now viewed in Sweden as “heroic”. 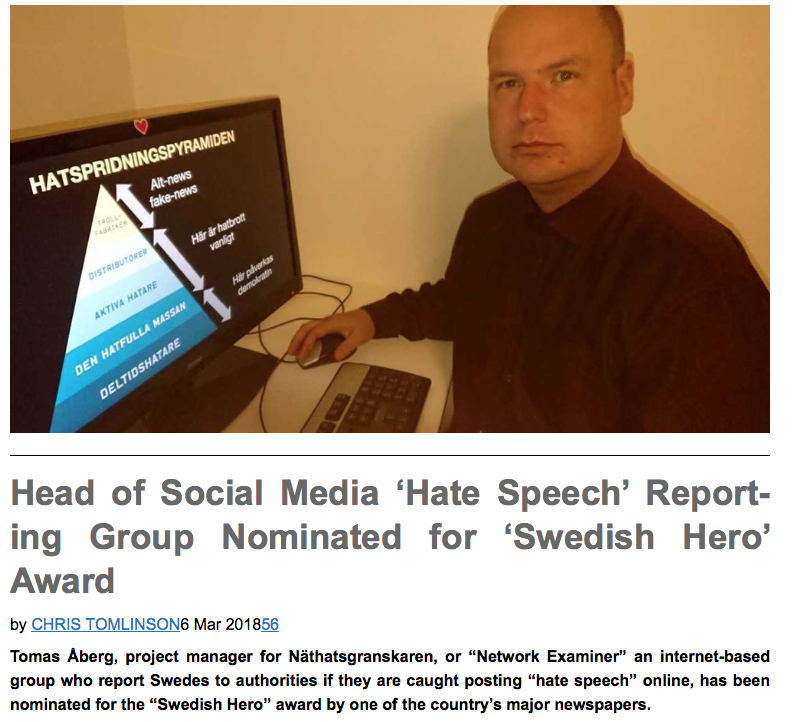 Notably in Sweden, while it is not seen as “compassionate” or “heroic” to starve animals to death, it is viewed as ‘heroic’ to report elderly citizens to the police for them to be prosecuted and have their lives potentially ruined for voicing their opinions on social media.

One of the elderly women, whose life Åberg has disrupted and possibly ruined, is a 73-year old woman with no criminal record, who shared an old text from 2015, widely available on the internet and written by someone else, in a small Facebook group of barely 50 people. She has been charged with “incitement against an ethnic group” for sharing the following:

“A biological sensation in Sweden. A new bird species (parasitus muslimus) has established itself here… In recent years, the Arab bird (parasitus muslimus) has been widely spread in northern Europe, largely because it lacks natural enemies here…The female has a comprehensive feather shield, where only the eyes are visible… The male usually has four females… The species is a migratory bird but with the weird feature that they never move back…”

Another woman, 75, was charged with “inciting hatred against an ethnic group” after writing the following about marriage among Muslims on Facebook in May 2017:

“The right to our bodies? Wonder what they mean by that? They say they are not allowed to choose the husband themselves. It must be a cousin, uncle… or maybe a grandfather. Probably they are completely IQ-liberated because inbreeding among Muslims has been going on for thousands of years. “

Yet another woman, Christina, 65, was charged with “inciting hatred against an ethnic group” for writing on Facebook: “If this continues, the intelligence in Sweden will be at goldfish level” and “Refuse all that has to do with Islam”.

According to news reports, in 2016 Christina was assaulted by four so-called “unaccompanied minors” (migrants) and knocked unconscious, an act that has impaired her memory. No one was sentenced for that assault, but she now faces financial difficulties and cannot pay her rent. She receives no help from the Swedish state. So far, Christina has reportedly been interrogated six times, for up to two hours each, for her alleged thought crimes, asked about her childhood, and whether she was doing drugs. She has no criminal record.

Denny, a 71-year-old pensioner, is currently on trial for “incitement to hatred” for having asked, “One can criticize fascism or Nazism, but why not Islam? Why should Islam have any protection status?”

A 64-year old man was reported to the police by Näthatsgranskaren for encouraging Swedes to learn self-defense. He is now being charged with “incitement to hatred against an ethnic group” for writing on Facebook:

“Before it’s too late, I suggest that anyone… who is able to manage to defend this country, joins the shooting clubs, self-defense clubs, karate clubs or anything… Everything is allowed for a Muslim as long as he harasses ‘infidels’… a Muslim feels as bad about chopping off a human head as we do about opening a can of sardines”.

Even before Åberg’s organization came into the picture, Sweden was prosecuting Swedes for “incitement to hate” as if the future of the Swedish state depended on it. Here are a few recent cases:

A 71-year-old woman referred to so-called unaccompanied minors as “bearded children” and said that they are “engaged in rape and demolishing their [asylum] homes”. She posted the comment on the Facebook page of the Sweden Democrats in June 2016. In February 2018, a Swedish court sentenced her to a fine for “incitement of hatred against an ethnic group”.

A woman in her fifties was sentenced to a fine in December 2017 for a post on Facebook, in which she called men from Afghanistan, who had lied about their age, “camel riders”: “These damn camel riders will never be self-sufficient, because they are damn parasites,” she wrote. Prosecutor Mattias Glaser emphasized that the post was directed against “young men struggling to stay in the country”. According to the court:

“… condescending words were used in a manner that… expressed contempt for people of Afghan origin or people from neighboring areas with respect to skin color and national or ethnic origin in a manner which fits the provision about incitement to hatred”.

In November 2017, a 65-year old man was sentenced to a fine for “incitement of hatred against an ethnic group”. His crime? Writing on Facebook that, “newly arrived” migrants, not Swedes, were guilty of committing gang rapes. According to the court, the man “claimed that Afghans, Africans and Arabs who have newly arrived in Sweden commit crimes such as gang rapes”. This claim, according to the court, constitutes, “clear contempt” for people of the mentioned national origins.

In February, a 55-year old man was sentenced to a fine for, “incitement against an ethnic group” for writing on Facebook that Sunni Muslims are behind most of the gang crime in Sweden, as well as rapes. “Somalis are Sunni Muslims… they are behind much of the gang crime in Sweden and all the other violence, such as rapes. Afghans are 80% Sunni and they are a damned people!” he wrote.

Sweden is being swept by a strong wave of murder, violent assault, rape, gang rape and sexual assault, in addition to the ever-present terror threat. Instead of using its limited resources to protect its citizens from the violent onslaught against them, Sweden is waging a legal war on its pensioners for daring to speak out against the same violent onslaught from which the state is failing to protect them. 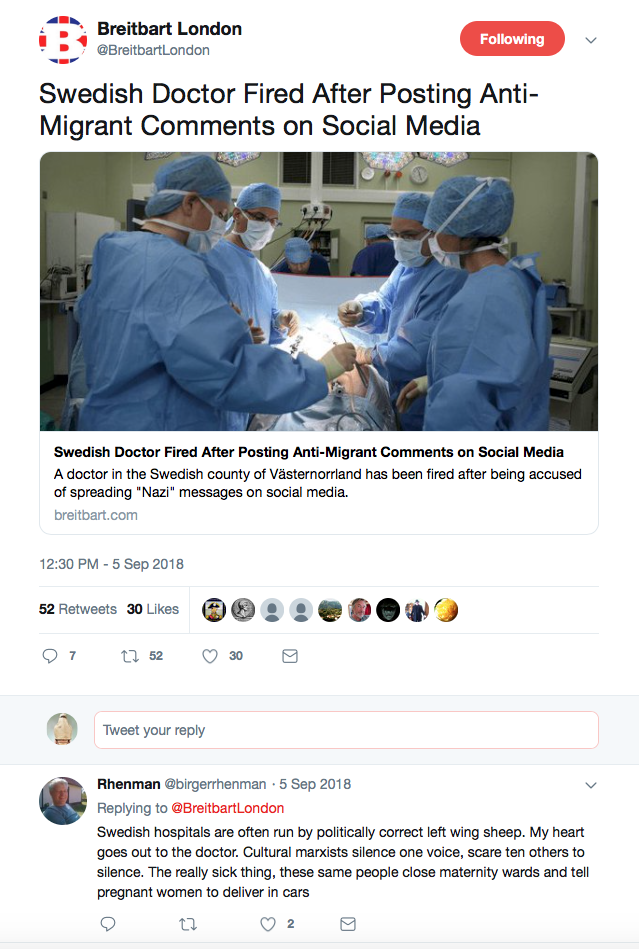