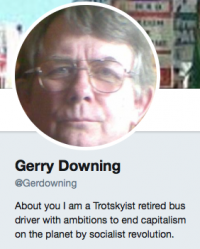 British communist Gerry Downing, who belongs to the Socialist Fight Organization, appeared on an episode of Kalima Horra, a show broadcasted on the pro-Hezbollah Maydeen TV program, hosted by former British MP George Galloway, explaining that his organization supports the destruction of the State of Israel. He said that a single state of Palestine with equal rights for all ethnic minorities is the solution.

And once that happens, there would be no more ethnic minorities because they would all be dead or forced to convert to Islam.