“We exploit democracy to seize power,” brags Muslim imam in Israel. “Don’t be fooled,” Sheikh Ahmad Badran warned the world, “we will never allow infidels (unbelievers in Islam) to rule over us!” 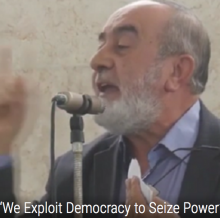 UnitedwithIsrael (h/t Maurice) During a recent sermon in Jatt, Israel, Sheikh Ahmad Badran claimed that democracy could be easily perverted by those seeking to impose Islamic rule.

According to Badran, infidels should be aware that “pluralistic” systems that combine Islam and “heresy” are anathema to people with his world view.

Ironically, without the religious freedom guaranteed to all faiths by the laws enacted by Israel’s democratically elected officials, Badran would never have been able to deliver this sermon.