UK Muslim woman all decked out in her ‘sharia finest’ – a full face/body-covering burqa – goes on hate-filled rant against homosexuals at LGBT Pride parade in London. 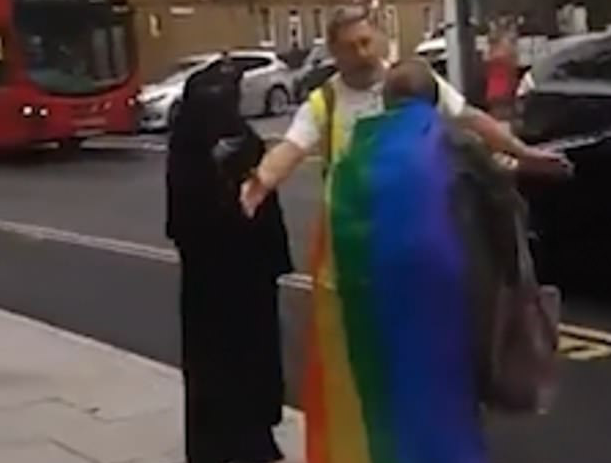 Daily Mail  (h/t Patty D) This is the shocking moment a Muslim woman spits homophobic abuse at a reveller on a Pride march in east London. The burqa-clad woman was filmed screaming ‘shame on you’ to a man draped in the LGBT rainbow flag during the rally on Hoe Street, Walthamstow, yesterday.

She screeches ‘God made Adam and Eve, not Adam and Steve’ while a marshal in a high-vis jacket moves in to shield the clearly shaken Pride marcher.

The Walthamstow arm of the Metropolitan Police said officers are investigating and branded the abuse a hate crime.  (And how do they intend to find the woman who was covered from head to toe in a big black Islamic trash bag?)