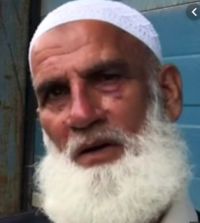 Al-Noor Islamic Center director Irfan Mushtaq alleges that the unidentified shooter at the mosque  was wearing a “NATO jumper, Army trousers, and a brown belt with bullets on it.” The 20-year-old Norwegian gunman then opened fire before being “overpowered” by a 65-year-old congregation member Mohammad Rafiq (photo right), who suffered minor injuries in the process, the only injuries reported from the incident.

BBC Police have described the suspect as a white Norwegian citizen of “around 20 years old.” Rune Skjold, the acting chief of the police operation, said the suspect had been known to police before the incident but could not be described as someone with a “criminal background.” Mr Skjold said the man appeared to hold “far-right” and “anti-immigrant” views.

Norwegian media reported that the suspect was believed to have posted on an online forum hours before the attack. The post seemingly praised the gunman who killed 51 people in mosques in Christchurch, New Zealand, earlier this year. The post also made references to a “race war”, the reports said.

The shooting has prompted debate over whether enough was being done to protect Norway’s Muslim population. Mosque director Mr Mushtaq said the government needed to take action.

Far Left Norwegian Prime Minister Erna Solberg said that Norway must fight hatred and anti-Muslim attitudes, ignoring the problem of Muslim supremacists trying to subvert the native culture by imposing their own, as they do in every non-Muslim country they have infiltrated. 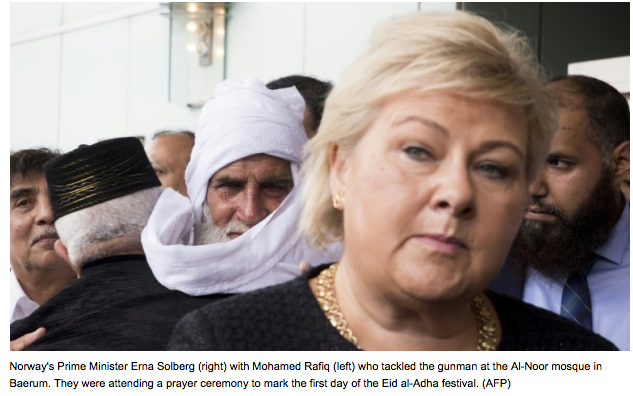 In separate comments, she said security had been ramped up for Sunday’s Eid celebrations and that tackling hate speech was a priority. “We are trying to combat this, but it’s a challenge. I think it’s a word-wide challenge in a sense,” she said.

Solberg called the shooting a “direct attack on Norwegian Muslims,” as well as an “attack on freedom of religion.” “Today we stand shoulder to shoulder with Norwegian Muslims in condemning the attack,” Solberg said in a Facebook post.

Muslim organization Islamic Council Norway described the attack as “the result of a long-lasting hatred of Muslims that has been allowed to spread in Norway”. It said authorities had not “taken this development seriously.”