Maybe it means speaking out against an increasingly lethal death cult posing as a religion, in spite of it making you a target for violence?

Morning Star  Apparently, The newly-elected leader of the UK Independence Party (UKIP), Richard Braine has been condemned for “Spiteful Islamophobia” after footage emerged of him arguing it should be illegal to publicly distribute the Quran in the UK and that some British towns are no-go areas for non-Muslims. 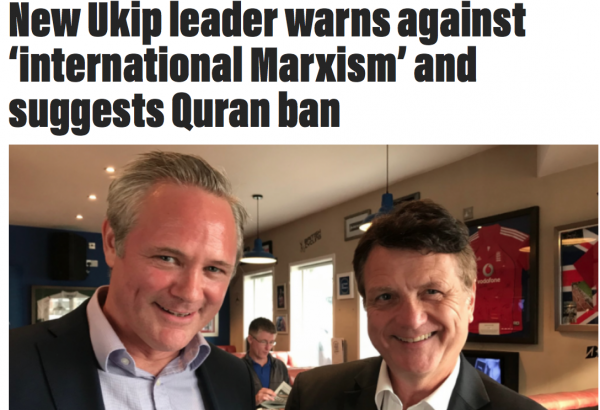 Braine also claimed that British Islam has particular problems with bigamy and welfare abuse, and referred to the jailed far-right anti-Islam activist Tommy Robinson as a “political prisoner.”

UKIP’s national executive had hoped the successor to Gerard Batten would move the party on from Batten’s increasingly far-right, anti-Islam views. However, Braine was backed by Batten and seems set to continue his legacy. (Smart man)

“We have laws against incitement, and yet there are people handing out Qurans in Leicester Square off a table – a book which tells people to kill us to please God. We’ve got to stop incitement in public places like that.” Former UKIP leader Nigel Farage quit the UKIP over Batten’s anti-Islam views and links to Robinson. (Shame on you, Farage)

Buzzfeed The new leader of UKIP has said that he often confuses London mayor Sadiq Khan with the 7/7 bomber Mohammad Sidique Khan, in a tweet that Labour condemned as “unacceptable racism”. Richard Braine, who replaced Gerard Batten as the leader of the anti-immigration party at the weekend, made the remark just seven weeks ago.

Mohammad Sidique Khan was one of the terrorists responsible for killing 56 people and injuring over 700 in a series of bombings on the London Underground and on a bus in July 2005.

Braine has previously defended activist Tommy Robinson, saying in a interview in May: “Tommy Robinson is not a racist or an extremist, that’s the media smearing him because he spoke about grooming gangs.”