The INQUIRER gives a long and rambling report about the shooter, Maurice Hill’s criminal history, but conveniently left out any mention of the radical Wahhabi mosque he attends.

Maurice Hill, the criminal who wounded six police officers in a shootout in Philadelphia and was arrested after a seven-hour standoff, attended a radical mosque.

The mosque, called Masjid Ahlil Hadith Wal Athar, is known for preaching the Islamist ideology promoted by Saudi Arabia referred to as “Wahhabism.”

Clarion Intelligence Network has been aware through its sources that the area where the shootings took place is known for trafficking in guns, drugs and counterfeit items. This criminal market has a strong Islamist element that includes extremist gangs.

Hill’s older sister said he “occasionally attended” an unnamed mosque, confirming initial reports from our sources that Hill is a Muslim. The sources do not yet have first-hand evidence of the shooter being personally involved in Islamist extremism.

There was a protest planned for Friday night calling for Hill’s release from jail. 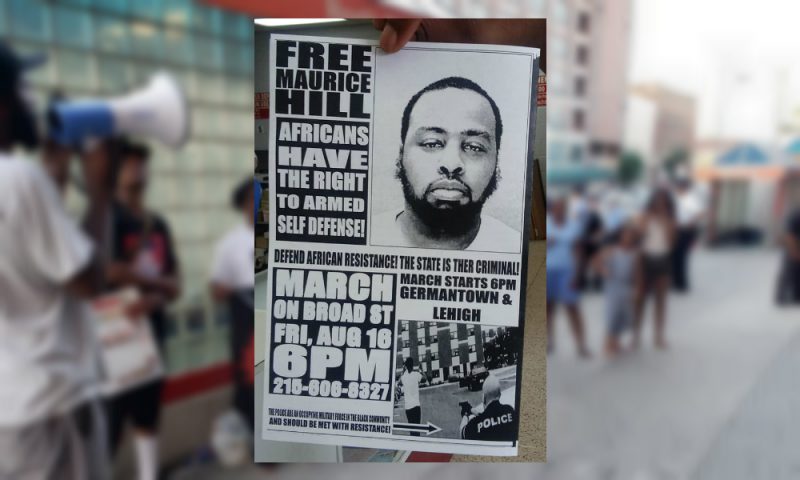 What the INQUIRER  reported:

Public records show that he has been arrested about a dozen times since turning 18, and convicted six times on charges that involved illegal possession of guns, drug dealing, and aggravated assault. He has been in and out of prison; the longest sentence handed him came in 2010, when a federal judge gave him a 55-month term.

And his record indicates he does not like to go to prison. In 2008, he was convicted of escaping, fleeing from police, and resisting arrest. Along the way, he beat criminal charges on everything from kidnapping to attempted murder.

Hill also spent time in federal prison. In 2008, he pleaded guilty to federal firearms violations after he was caught with a Smith & Wesson .357 and later a Taurus PT .45 semiautomatic. His prior felony convictions should have barred him from owning those weapons. U.S. District Judge Paul S. Diamond sentenced him to four years and seven months in prison.

More recently, Hill was convicted of perjury in 2013 and sentenced to seven years of probation. He appeared before Common Pleas Court Judge Rayford Means for three different alleged violations of probation — at least two of them related to new cases, which he later beat.

In one of those cases, Philadelphia police arrested Hill in May 2014 after spotting him driving an unregistered scooter. But when officers tried to stop him, he raced down an alleyway against traffic on a one-way street and then onto a sidewalk, sending pedestrians scattering, court records say. Hill crashed the scooter and then fled on foot but was apprehended. He was charged with driving without a license, recklessly endangering another person, and fleeing police, but was acquitted on all counts.

According to court filings, his accuser told police she had agreed to sell marijuana for Hill but then changed her mind. When he summoned her to his house on the 6900 block of Greenway Street in Southwest Philadelphia days later, she said, she overheard Hill and an associate discussing killing her. Fearful for her life, the woman said, she called 911. When officers arrived, she fled as Hill and his associate hid the crack cocaine and marijuana in a tire out back. Investigators discovered 83 grams of marijuana.