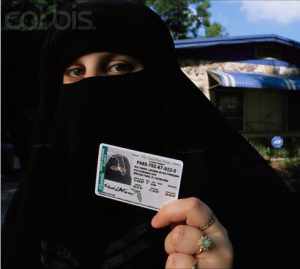 Designated terrorist group CAIR is whining about language in an official form stating that when an individual has his or her picture taken at a SOS facility while wearing a Muslim kufi (male religious skullcap) or hijab (female religious head-covering), they may not remove their religious headwear in public or else they risk having their driver’s license or ID cancelled.

CAIR–Chicago’s client, who wears a hijab, was forced to sign the form, or she would have been denied a license.

“In observation of my religious convictions, I only remove my head dressing in public when removal is necessary (such as for a medical examination or a visit to a hair dresser or barber). I do not remove the head dressing in public as a matter of courtesy or protocol (such as when entering a professional office or attending a worship service). I acknowledge that if the Director of the Driver Services Department is provided with evidence showing I do not wear a religious head dressing at all times while in public, unless circumstances require the removal of the head dressing, my driver’s license or identification card may be canceled.”

“The State should not be in the position of forcing people to choose between acquiring a necessary form of ID or a needed driver’s license and the free practice of their religion,” said Phil Robertson, Litigation Director for CAIR-Chicago.

This is not the first time CAIR has sued over Islamic headgear and driver’s licenses.