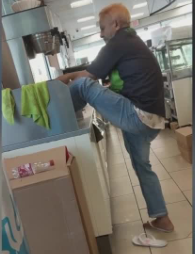 A MUSLIM employee at the 7-ELEVEN on Gratiot and 13 Mile Road in Roseville was captured washing his dirty feet in a sink that is meant for washing hands, something he says he has to do five times per day, even at work, as his religion requires* before praying.

*What he doesn’t say is that it is perfectly acceptable in Islam to catch up on missed prayers any other of the day.

WXYZ  The sink is next to a coffee machine and across from a grill station. The footage turned stomachs of customers at the store. Emily Divel recorded the video and posted it to social media. “As I walked in I could hear him loudly spitting in the sink,” Divel said.

Divel said he then put his foot in the sink. Action News confronted the employee who said it was a religious practice. The unidentified employee said he’s Muslim and it’s mandatory he clean his feet, arms, and face at least five times a day.

7-Eleven released a statement: “We take the cleanliness of 7-Eleven stores very seriously so thank you for making us aware of this incident and allowing us to investigate this matter.”

MUSLIM FOOTBATH JIHAD: Reason #137 why you should NEVER hire a Muslim

MUSLIM FOOTBATHS ON THE MARCH

Is it a mop sink, a Muslim footbath…or an extra urinal for students at the University of Georgia?

DISGUSTING! Boston school scraps Pledge of Allegiance on 9/11 for poem about a Muslim washing her filthy feet in a sink at a Sears Department Store