Sinead O’Connor, 52, has announced she is selling all her clothes from before she converted to Islam to raise money for a women’s refuge. Hey Sinead, you have a lot of money from your singing career, why not just make a donation instead of selling your smelly old clothes?

And here is Sinead, er I mean Shuhada, singing the Islamic Call to Prayer:

And of course this, as before all shows for years https://t.co/1yQYVGe4jp

The Journal During her performance on the Late Late show, O’Connor who now goes by the name Shuhada Sadaqat wore a bright red hijab and full body bag attire as spoke about her move from Christianity to Islam. 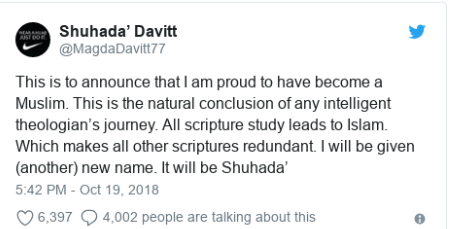 “The word ‘revert’ refers to the idea that if you were to study the Koran you would realise that you were a Muslim all your life and you didn’t realise it. That’s what happened to me,” she said. “I am 52. I grew up in a very different Ireland to the one that exists now and it was a very oppressed country religiously speaking, and everybody was miserable; nobody was getting any joy in God.”

BBC It is not the first time O’Connor, who legally changed her name to Magda Davitt last year, has publicly spoken about religion. In 1992, she sparked controversy after ripping up a photograph of the Pope live on US television.

Seven years later, she was ordained by a breakaway church in Lourdes. The Catholic Church, which does not allow women to become priests, did not recognise the ceremony. 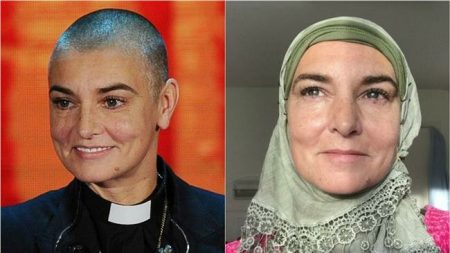 She later hit out at allegations on social media that she had changed religion on more than one occasion.  “Lots saying I’ve changed religions more than once. Not so. I was born into Christianity and I changed to Islam. So that’s one change. For those who have difficulty counting.”