The Hamas-linked Council on American-Islamic Relations (CAIR), the nation’s largest Muslim-only special rights and advocacy organization, today called on Senator Lindsey Graham (R-SC) to apologize for appearing smiling in a photo with notorious Dutch so-called “Islamophobe” Geert Wilders. CAIR is also asking Graham to repudiate the anti-Muslim policies and statements that politician has made. 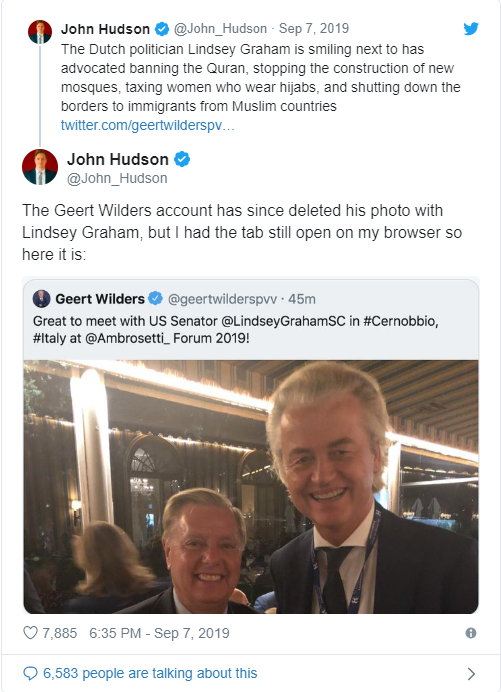 CAIR On Saturday, Wilders posted a photo on Twitter of himself and a smiling Senator Graham with the caption, “Great to meet the US Senator @LindseyGrahamSC in #Cernobbio, #Italy at @Ambrosetti_Forum 2019!”

In the past, Wilders has stated “I hate Islam,” called the Quran a “fascist book” that should be banned and compared it to Adolf Hitler’s autobiography, “Mein Kampf”, referred to the Prophet Mohammed as “the devil,” and proposed putting a tax on Islamic head scarves (hijab) worn by Muslim women. In 2016, he was found guilty of inciting discrimination against the Netherlands’ Moroccan population.

“The vile anti-Muslim bigotry spewed by Mr. Wilders stands at odds with the values of religious freedom and pluralism that Senator Graham took an oath to defend,” said CAIR Government Affairs Director Robert McCaw. “Senator Graham must immediately apologize for appearing in this photo and issue a strong repudiation of the vile, Islamophobic views endorsed by Mr. Wilders. American Muslims in South Carolina and across the country will be watching.”