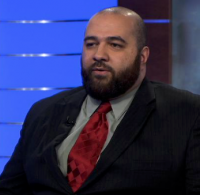 Last I heard, Mohamed, Islam is NOT a race. But MUSLIMS are still the biggest threat to commercial airliners this country has ever seen. Knowing that Muslims passengers are being subjected to enhanced security screening at least gives the flying public some peace of mind when they realize they have to get on a plane with someone who looks like you.

Why does the media keep covering these Muslim non-stories? It’s because of people like him that real Americans are subjected to long security lines at airports, too.

ORIGINAL STORY: OH, BOO HOO…Muslim whining because he was stopped at JFK airport and questioned for 3 hours about meeting with terrorists