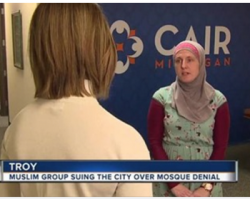 Designated terrorist group CAIR-Michigan has already filed  lawsuits against the city but, to date, has gotten nowhere, as I suspect will happen to the Department of Justice’s lawsuits. The state of Michigan is littered with mosques because of its high Muslim population. Let the lazy Muslims in Troy get off their asses and find one in the area.

As of the date of filing its complaint, the city of Troy does not have a mosque or Muslim place of worship, despite boasting about being one of the most diverse cities in the state of Michigan.

CAIR-MI Staff Attorney Amy Doukoure says, “The City of Troy is one of the largest communities in Michigan in both land size and population. It is appalling to think that they could have seventy-three places of worship for other faiths, but not a single mosque.”