Designated terrorist group CAIR held a news conference in Falls Church, VA, to announce the filing of an anti-Muslim religious discrimination complaint against Fast Trak, Inc., a Verizon contractor, who refused to hire a Muslim woman in religious attire because she demanded time and space to pray during working hours. 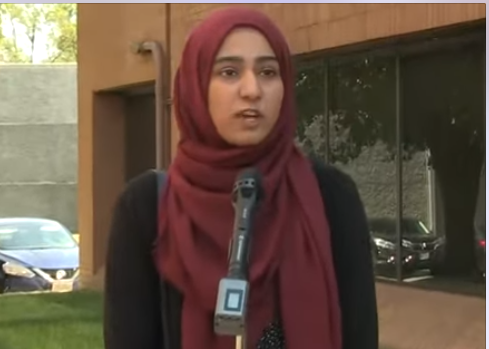 Fast Trak’s CEO allegedly ridiculed a Virginia Muslim job applicant – in front of company staff – by pointing at her hijab  and mocking her faith and her request for several prayer breaks during work. Fast Trak reportedly denied her religious accommodation request and refused her employment.

CAIR’s complaint states in part: “Assistant Manager Josie abruptly ended the meeting after denying her request for breaks to allow her to pray, before walking her to a common area, and – in front of other staff– announcing to CEO Gavilondo that Ms. Indorewala’s ‘hours don’t work for her.’ He immediately threw his arms up in the air and chastised her exclaiming ‘this is a business.’ He then pointed at her hijab and mocked her, saying ‘Religion? I don’t wanna deal with that here. We don’t want those shenanigans here.’”

FYI: Don’t believe the crap about her “only needing 5 minutes to pray.” That doesn’t include the washing ritual she has to perform before she prays and the prayers take longer than 5 minutes, not to mention, she would need a ‘private’ space in the office where she can spread out her prayer rug facing Mecca, so she can get down on the floor and raise her ass to allah during her prayers)