No need to bother voting in the upcoming October 21st election, when Andrew Scheer, the main conservative opposition to the Muslim-pandering, far left, incumbent Prime Minister Justin Trudeau, is seen appearing in photos like the one below.

As they say, you will be known by the company you keep.

Here’s a tweet from a Muslim MP named Salma Zahid. Zahid, a Muslim Liberal, seems very agitated by this, judging by the series of other tweets she posted. 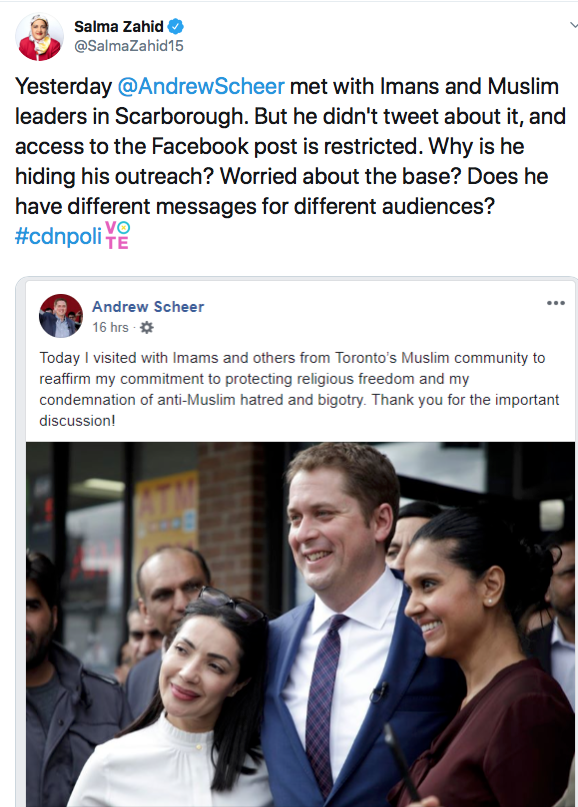 According to Ezra Levant of Rebel News, “I immediately recognized one of the men in the photo as Omar Subedar. He’s an Islamic teacher, publisher, politician. He’s a huge fan of Justin Trudeau — and of Patrick Brown, the disgraced former leader of the Ontario PCs.

Andrew Scheer’s new friend Omar Subedar, on how to deal with a “stubborn, arrogant or disobedient” wife.

Subedar says that, if all else fails:

Strike them: If the problem still does not get resolved then as a final resort Allah has permitted the husband to discipline his wife by striking her, however this does not imply that Allah is promoting domestic violence. The Prophet (P.B.U.H.) has made it very clear that the beating should not be agonizing in any shape or form.

He actually goes on to recommend using a foot-long heavy stick.