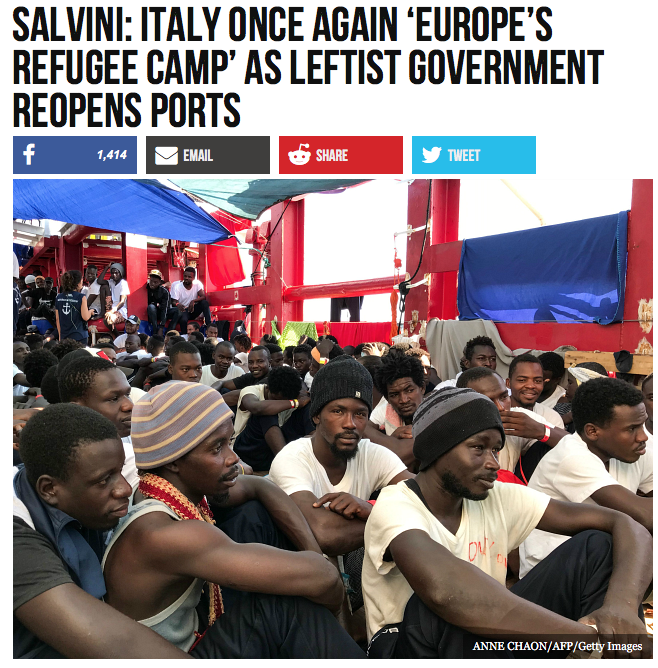 Former Interior Minister Matteo Salvini has sharply condemned the Italian government’s shift in immigration policy, saying that Italy is going back to being “Europe’s refugee camp.”

Breitbart The leader of Italy’s populist League (Lega) party has sent out a flurry of tweets Saturday and Sunday slamming a rollback of his decrees as interior minister to curb illegal immigration, accusing the new Five Star-Democratic Party government of betraying the Italian people.

“Now the new leftist government is reopening the ports: hardly advocates of the Italians, here I see advocates of illegal immigrants,” he wrote.

Dario Franceschini, Italy’s new Minister of Cultural Heritage and Activities and a member of the Democrats (PD) sent out a tweet explaining the new policy toward migrants and NGOs.

“The government assigns a safe port to #OceanViking and the (illegal) migrants will be welcomed in many European countries,” he said. “The end of Salvini’s propaganda on the skin of desperate (Muslim criminals, rapists, freeloaders) at sea. Politics and good international relations are back to address and solve the problem of migration.”

“The new government reopens the ports and Italy goes back to being Europe’s REFUGEE CAMP,” Salvini said. “Over the last 24 hours there have been more than 200 landings in Lampedusa,” Salvini said, referring to Italy’s southernmost point, the island of Lampedusa.

“If they cancel the security decrees they do not harm the League but 60 million Italians,” he said. “Today, slavers, racists, and colonizers, exploiters of women and men, are only found on the left,” he added. 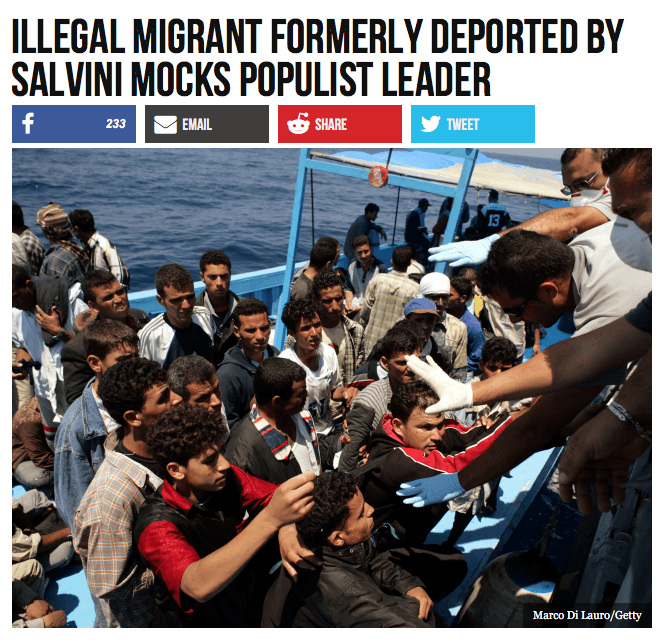 An illegal Tunisian Muslim migrant, who had been deported from Italy, mocked populist leader Matteo Salvini after getting back into the country, saying he was glad Salvini was gone.

Breitbart The Tunisian is one of around 2,000 migrants who have landed in Italy in September and was interviewed by Italian media on the island of Lampedusa last week, Italian broadcaster TGCOM24 reports.

“I came in 2011. They expelled me in 2019. I had a residence permit. Then I participated in a fight, and they denounced me. Because at that time, there was Salvini,” the Tunisian said.

“I know he’s not there anymore and I’m happy about it,” he added. The migrant confirmed that many in Tunisia knew that Salvini was no longer in the Italian government and claimed that more migrants were leaving the North African country for Italy every day.

Senator Salvini reacted to the interview with the Tunisian by saying: “‘Expelled because of Salvini, he is already back. And with the new [Italian] government, many migrants are ready to leave Tunisia to come to Italy.’ This is madness! Shame on you Conte, you are destroying Italy!”

Salvini has repeatedly slammed the leftist Italian coalition government of the Five Star Movement and the Democratic Party which has opened the country’s ports to migrant transport NGOs. As interior minister, Matteo Salvini had closed the ports to NGO ships.