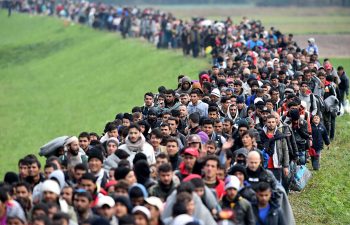 Thousands of Muslim migrant wannabes from Bosnia, shouting “Allahu Akbar,” are marching toward the generous welfare states of Western Europe, using the Balkans route. Notice how these 1500 are all strapping, young, military-aged males pretending to be refugees. More than 150 arrive every day.

Here is the new migrant wave #Orban has been talking about in recent days. #Greece relocated thousands of migrants to the mainland a few weeks ago.This video shows 1500 of them (all men) on the march through #Bosnia. Authorities say 150 new migrants arrive in #Bihac every night? https://t.co/vjLsYBdwz6