According to Council of American-Islamic Relations (CAIR), “120+” members of Congress sent the Muslim Brotherhood-linked organization letters “welcoming” their 25th anniversary gala scheduled for November 9 at the Grand Hyatt hotel in Washington, D.C. 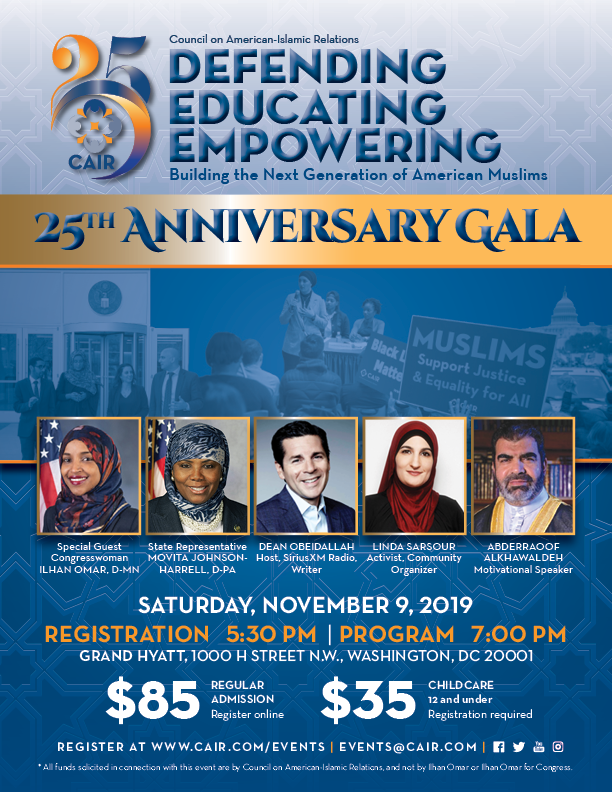 Clarion Project (h/t Linda R) CAIR describes itself as “America’s largest Islamic civil liberties group,” but in 2007, the U.S. government labeled CAIR an unindicted co-conspirator in the trial of the Holy Land Foundation for financing the Hamas terrorist group.

In November 2014, CAIR was designated as a terrorist organization by the United Arab Emirates along with a host of other Muslim Brotherhood entities.

The FBI subsequently severed official contacts with the group, saying it “does not view CAIR as an appropriate liaison partner.”

The announcement by CAIR of this support by members of Congress  follows accusations by former employees of CAIR’s discriminatory and sexist practices and alleges a culture of abuse with the organization.

Lori Haidri, a former employee of the Council of American-Islamic Relations (CAIR), made the accusations in the following Facebook post: 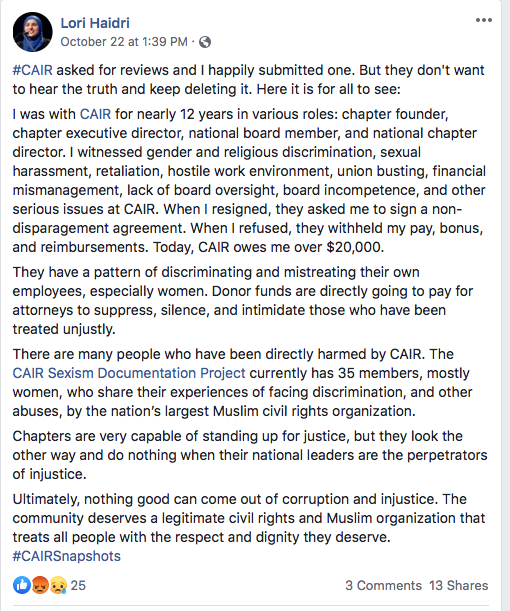 Members of Congress have no business writing letters in support of this organization. Below is a partial list, including one Republican Senator and two Republican Congresspersons provided by the Investigative Project on Terrorism

Algemeiner CAIR’s mission statement makes no mention of Palestine. Instead, it says it aims to “enhance understanding of Islam, protect civil rights, promote justice, and empower American Muslims.” It describes its lobbying arm as focusing “on issues related to Islam and Muslims. The department monitors legislation and government activities and responds on behalf of the American Muslim community.”

But a review of CAIR’s activities shows a significant amount of time is spent on pushing Palestinian narratives, while never addressing Hamas’s obsession with pursuing terrorism at the expense of Palestinian civilians, or the Palestinian Authority’s ceaseless rhetoric fomenting hatred.

That’s especially true in times of conflict. CAIR also routinely teams with groups devoted to opposing Israel’s very existence. It should not be surprising to those familiar with CAIR’s origin story. It was created by a Muslim Brotherhood-run Hamas support network in the United States. Witnesses told the FBI that supporting Hamas was its mission from the start.

CAIR officials also have spent years casting the FBI as an imminent threat to the Muslim community, depicting agents as dark figures lurking outside their doors, as willing to threaten, lie and even break the law just to set up innocent Muslims, and as cold-blooded murderers. CAIR reflexively dismisses counter-terrorism indictments as entrapment.

The Investigative Project on Terrorism obtained a copy of the booklet containing the letters mostly from Democrats and Democrat presidential candidates, which can be seen here. Many of the letters use similar language, likely supplied by CAIR. Most note the event and praise the organization for its civil rights and anti-bigotry work. A few examples of Democrat letters followed by those of the 3 Republicans: 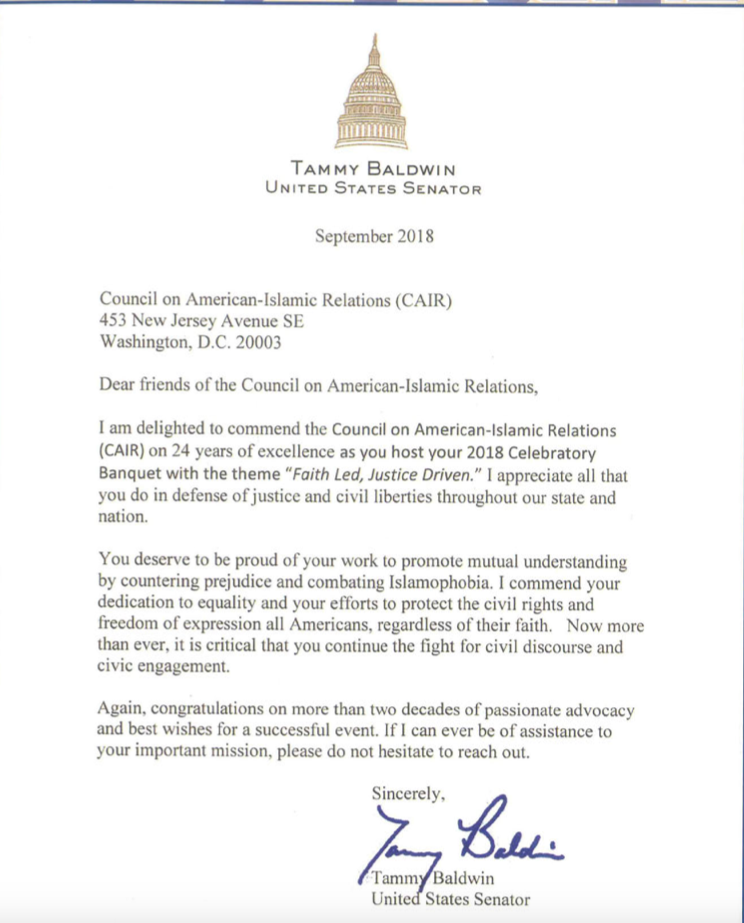 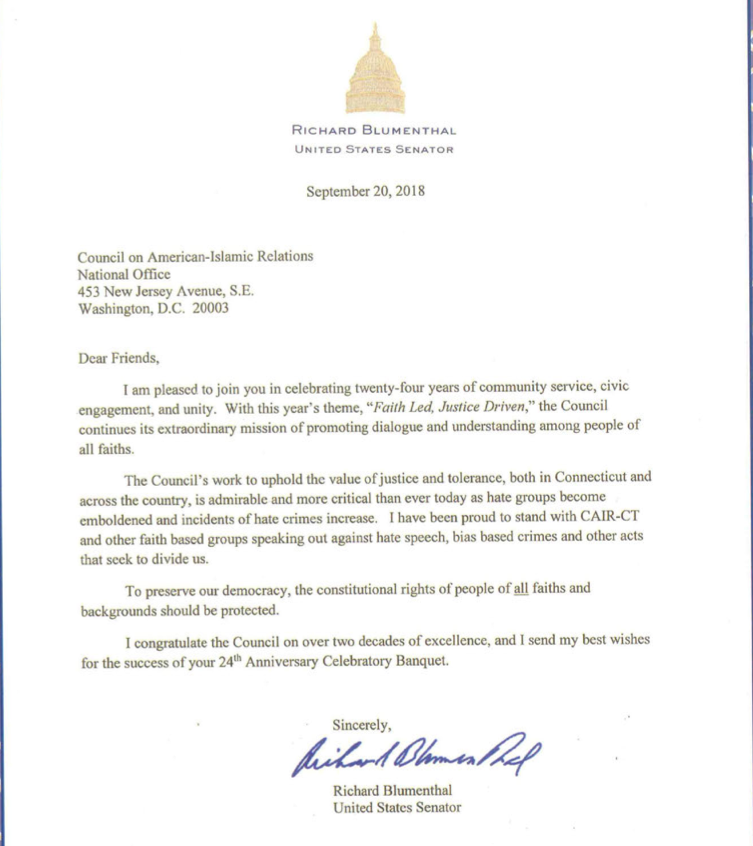 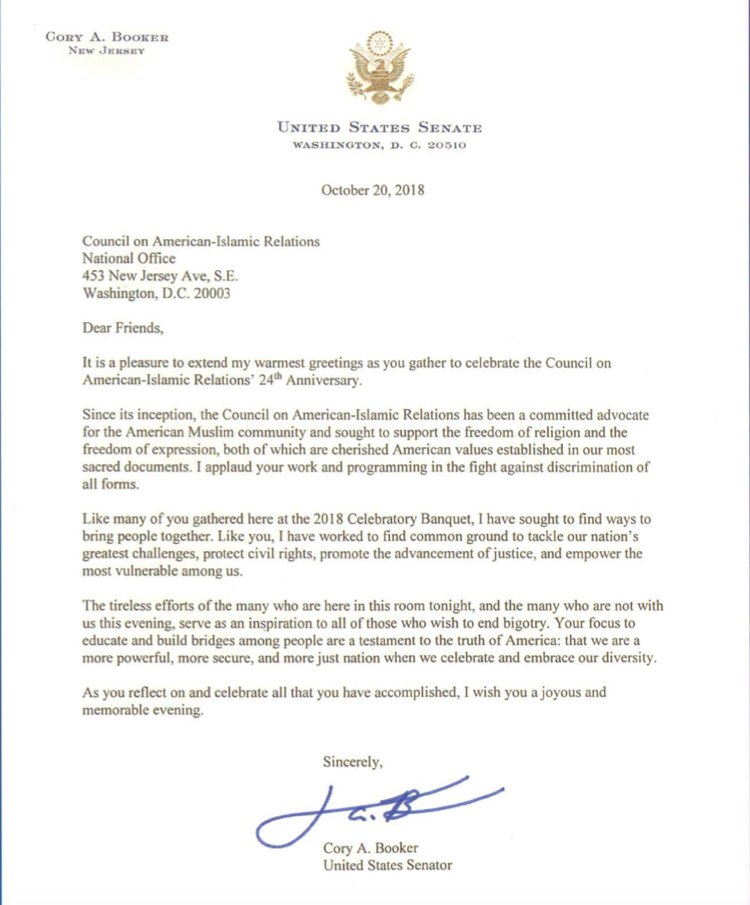 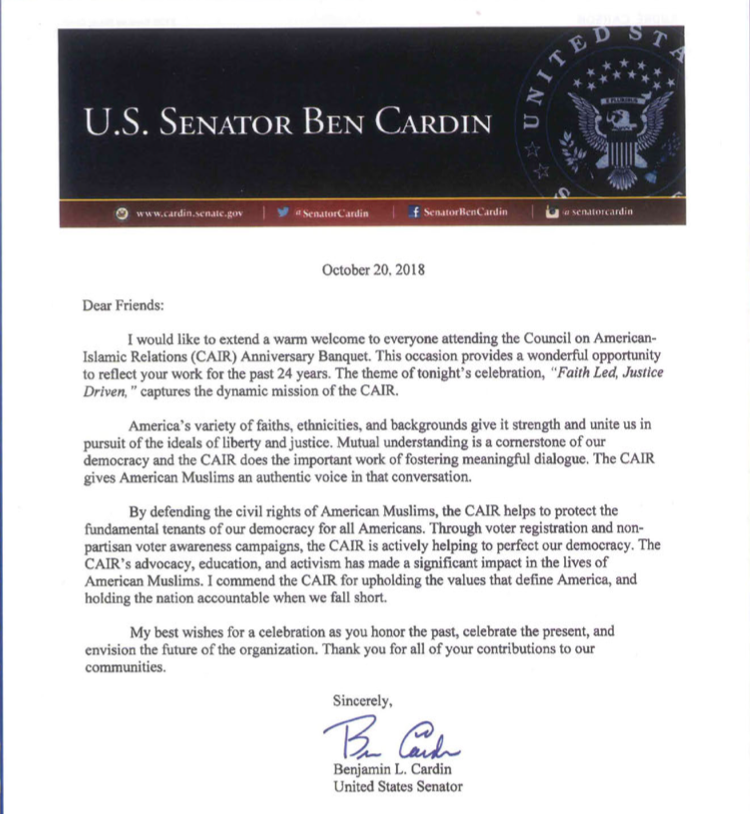 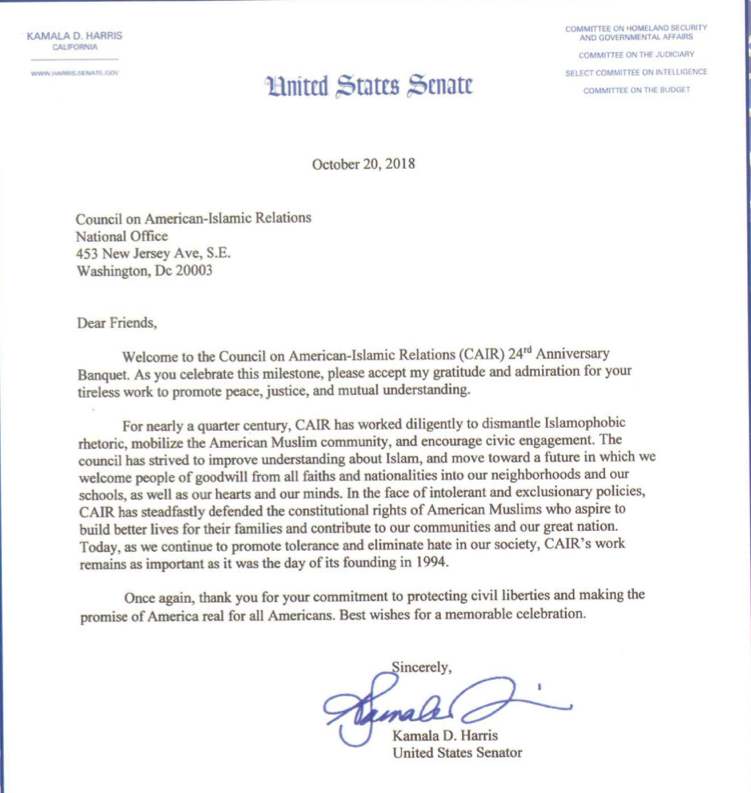 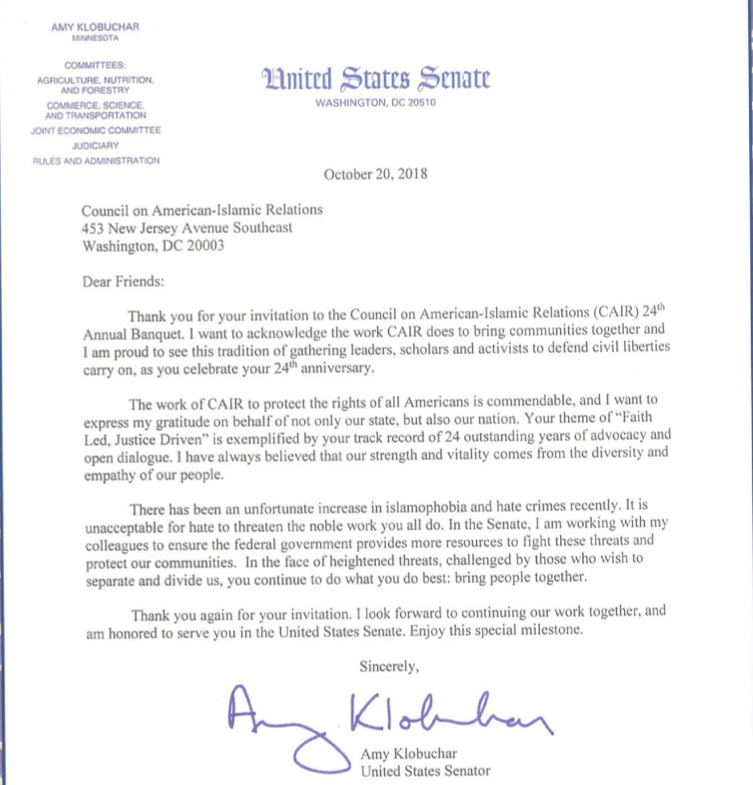 And  letters from the 3 Republican traitors: 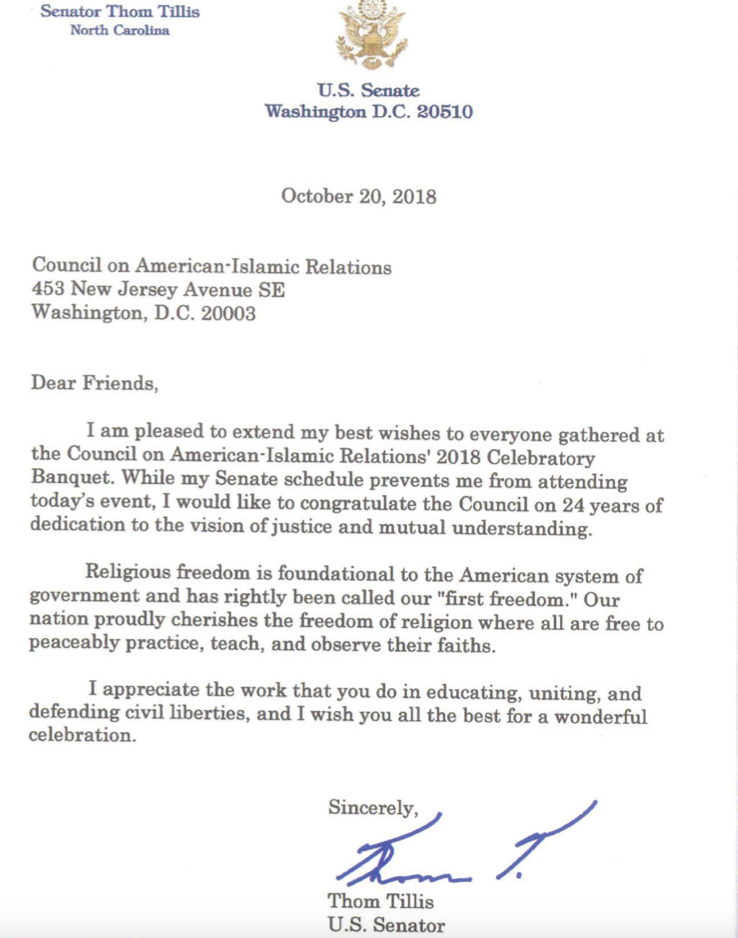 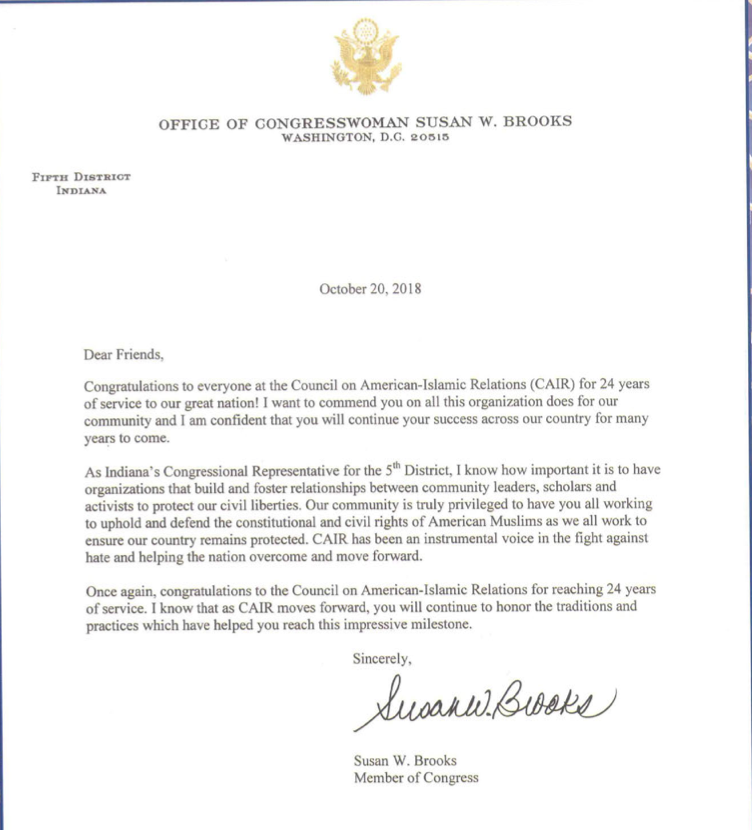 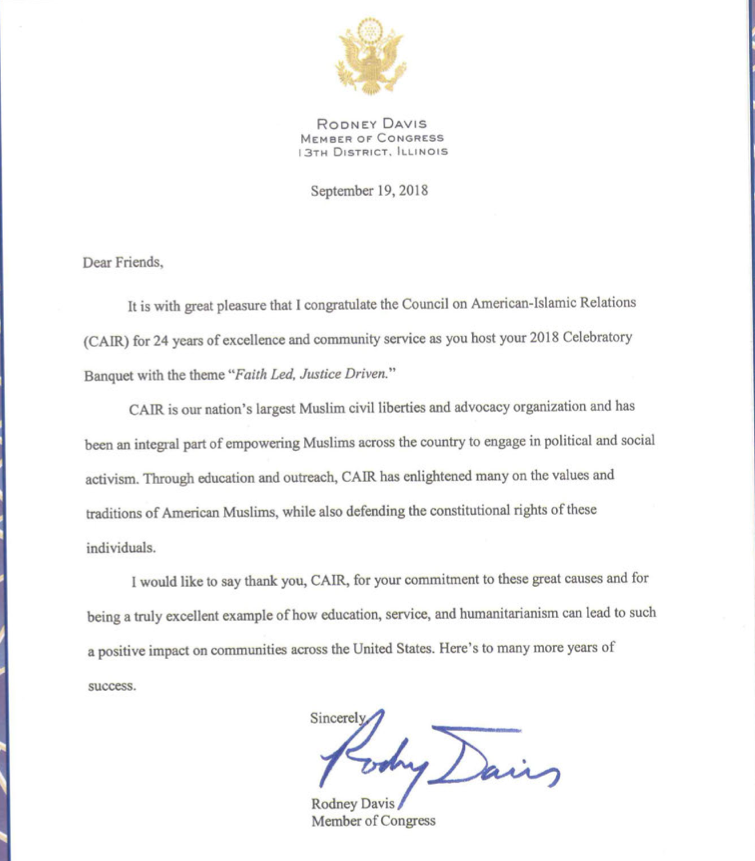