Just another reason why no country in the West should allow the return of its Muslim female citizens who went to Syria to become ISIS brides and ended up ISIS widows.

These are the brides of ISIS. This is where Shamima Begum hangs around. These are the type of poor women labelled by the MSM as “Alabama Woman.” Do they look like they regret joining ISIS? No. They want revenge for Baghdadi. They want to kill us all.pic.twitter.com/LnPXhxrc3G 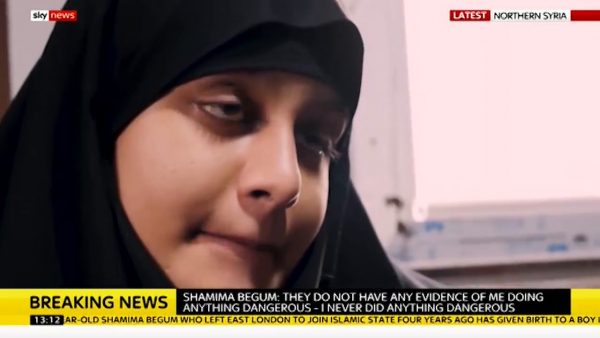 UK MIRROR  Ms Begum, now 20, is bringing proceedings against the Home Office at the High Court following the decision to strip her of British citizenship after she fled to Syria.

Begum, who fled from East London to Syria in 2015, lived under IS rule for more than three years. She was found, nine months pregnant, in a Syrian refugee camp in February this year.

UK home secretary stripped her of her British citizenship, a decision her lawyers argue was unlawful as it rendered her stateless.

In his written case, the Home Office’s barrister, Jonathan Glasson QC argued that Ms Begum “was a Bangladeshi citizen by descent, in accordance with Bangladeshi law, and so was not rendered stateless by the deprivation decision”.