And more than 500 of them of all races and religions showed up in Woodland Hills to protest against designated terrorist group CAIR’s (March 2019) annual banquet and fundraiser which featured radical Congressmuslim Ilhan Omar (D-MN) as the keynote speaker.

Jewish Journal Waving American and Israeli flags, protesters wore “Make American Great Again” caps and yellow Stars of David with the word “Jude” on them. Some of their signs read “Remove Hate From Our House,” “Your Hate Makes Us Stronger,” “This Is How It Started in Germany,” “No Sharia Law in America,” “Reject Ilhan’s Bigotry” and “Ilhan Omar Is a Pile of Human Waste.” 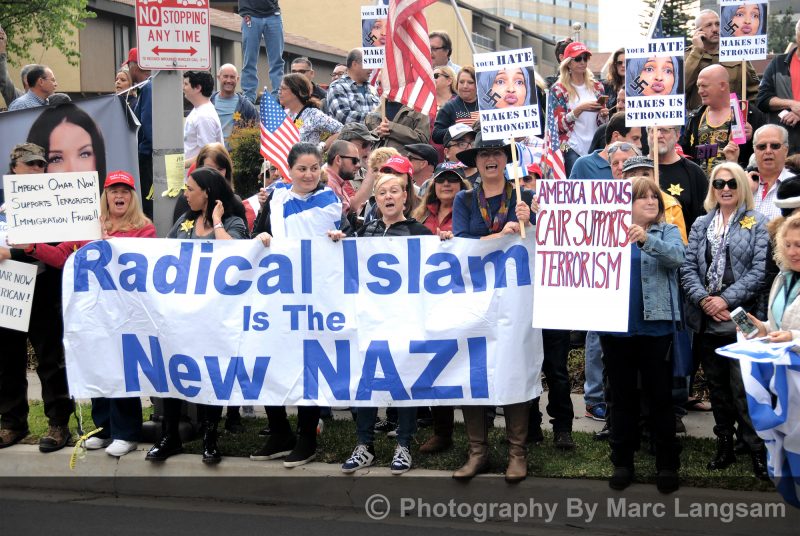 At times, the protest got ugly, as when people in formal attire walked into the hotel across the street from the protest against the CAIR event and protesters shouted hateful remarks, including “traitors” and “bastards.”

The rally against CAIR and Omar, a grass-roots effort that was publicized largely through social media, drew American Jews, Israelis, evangelical Christians, Catholics and others. “As a Christian, it is the belief that it is my duty to stand behind Israel,” said Kira Innis, an African-American in a red Make American Great Again cap.

Ignore the ugly woman who comes from ‘Jewish Voice for Peace,’ a virulently anti-Israel, anti-America group of far-left Jews funded by George Soros.