Italy’s new leftist government is set to hand out more welfare cash to migrants than its own disabled citizens. Recently released figures show that the state will allocate 50 million Euros ($55 million) next year, 200 million Euros ($200 million) in 2021, and 300 ($330 million) Euros in 2022 to the Disability and Self-Reliance Fund. 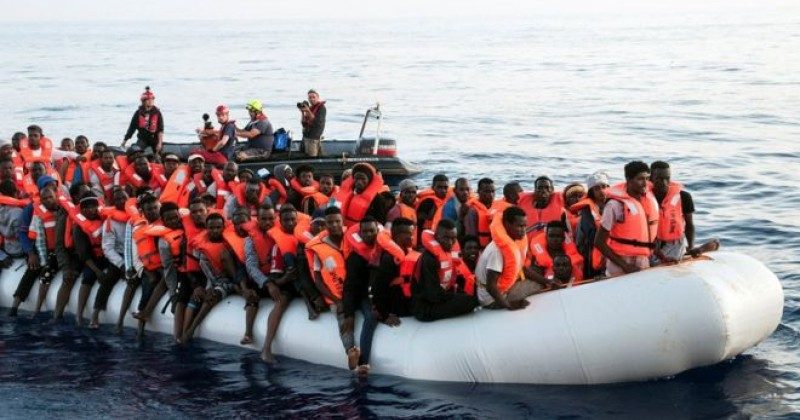 Summit News Given that two million out of three million disabled people in Italy rely on state benefits, this works out at just 54 cents per day in welfare, which isn’t even enough to live on a subsistence diet.

According to Fabio Scaltritti of the Community San Benedetto al Porto in Alessandria, the question over handing money to migrants isn’t an economic issue, it’s an “ethical” necessity.

“The gap with the disabled continues to be truly absurd,” writes Luca Sablone. “According to these data, Italians who unfortunately are disabled find themselves mocked by the refugees who arrive in our country.”

As we previously highlighted, when the leftist government was last in power during the height of the migrant crisis, some Italian citizens had their property requisitioned by the authorities and were forced to rent it out to migrants at rock bottom prices. 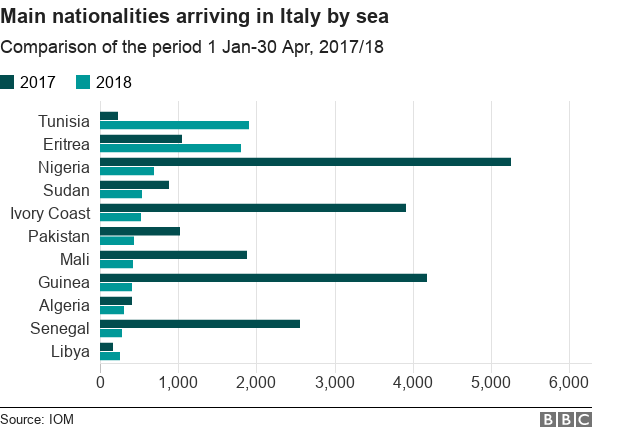 Looks like the bad old days are back now that Salvini is out of power.

The incredibly shrinking Italian population: By 2080, Italians will be a minority in their own country 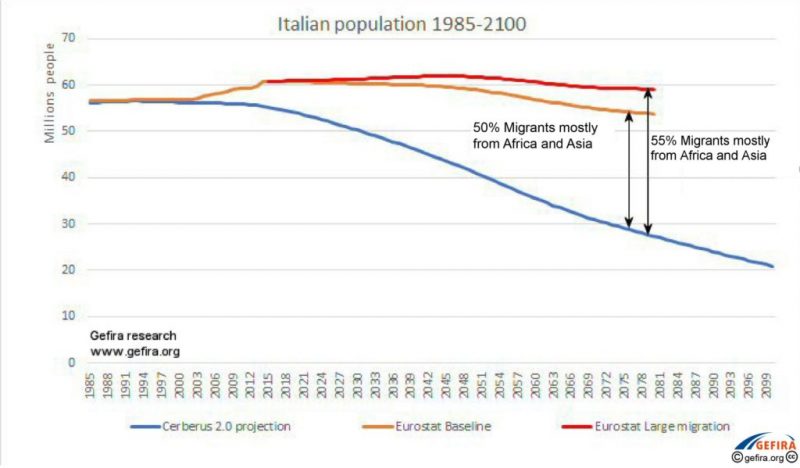 If the official Eurostat forecast is correct, then within 60 years or, taking into consideration the current pace of migration even sooner, 50% of Italy’s inhabitants will be of African or Asian descent. The figures found by our demographic-research team are by far not unique and government statisticians have the same numbers. Not only are the Italian and European authorities fully aware of this, but they seem to be executing a re-population program on such a monumental scale that will dwarf the Swedish mass migration experiment.

The Italian fertility rate (of indigenous and naturalized female citizens), i.e. the number of children per woman, is 1.34, which is far below the replacement level of 2.1. Much the same is true of the whole European continent.

In this respect Europe resembles Japan.The difference is that while the Japanese authorities expect the country’s population to decline by a stunning 60% by the end of this century, the European governments predict a population growth. Why is that so? The answer is simple. The European leaders have opted for replenishing their nations with migrants whereas their Japanese counterparts have not. The Tokyo authorities refuse to replace their people with aliens, knowing full well that in the long run such a step would mean that Japan will only continue to exist in name. 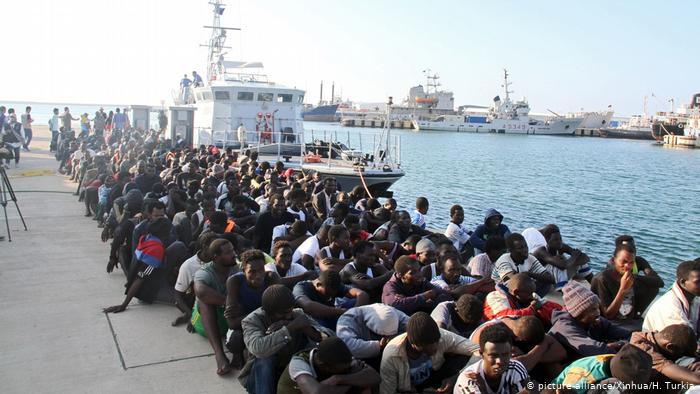 There is a large group of social scientists who cling to the belief (and that’s the right word for it) that migrants from Morocco, Syria, Pakistan, Afghanistan will absorb the Italian culture and blend into the Italian nation. The common reply to critics of immigration policies is that ”problems will disappear after the second generation” or that ”it will be like the US” where there are Italian-Americans, Chinese-Americans, African-Americans and so on.

In other words, within one or two generations the new African and Middle Eastern Italians will behave as Italians, and no difference will be noticeable apart from their skin color. A different opinion, based on tangible evidence, is deemed racist and treated accordingly. The discussion in “polite society” is focused on the size and speed of migration and the integration of the arrivals. Any person who believes mass migration from Africa will change the face and soul of the nation is labeled a racist. 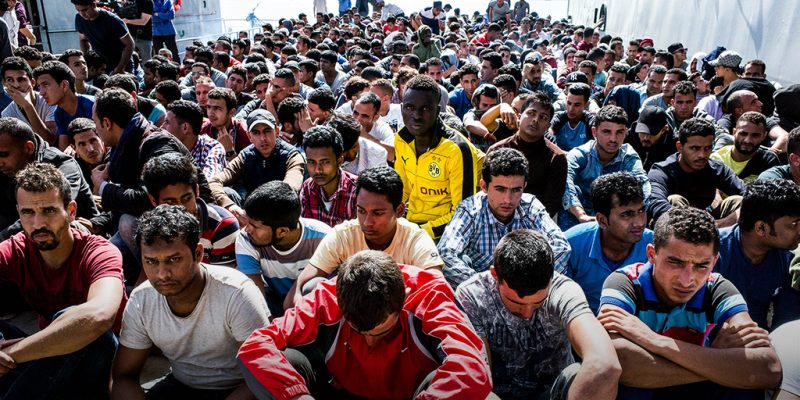 And yet, problems do not ”disappear after two generations”. France, which now has the third generation of third-world immigrants, already had faced ethnic riots a decade ago, with the then President Sarkozy labelling the North African rioters ”scum.” What’s different today is that these riots evolved into regular outbreaks of Islamic terrorism we are seeing in Europe today.

While the general public is unaware of its fate, top policy-makers know the numbers. German, Spanish, Norwegian, Irish and Dutch NGOs as well as the European Navy have ferried a shocking 600 thousand non-Western migrants from Libya to Italy since 2014. This has been done with the full complicity of the current Italian authorities. The grand replacement is no accident nor is it intended to be stopped. It is a well designed, devious program without the European natives having a say. 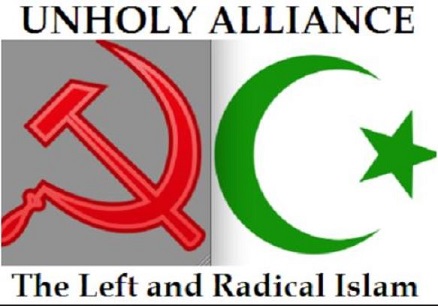 As pointed out by Dr. Abdessamad Belhaj, a highly regarded scholar of Islam, the Left and Islam share affinities that are structural, not accidental:

Also see: “Why the Left encourage the cancer of Muslim migrants” and “UN admits ‘refugees’ are ‘replacement migration’ for Europe and other low-fertility countries”. 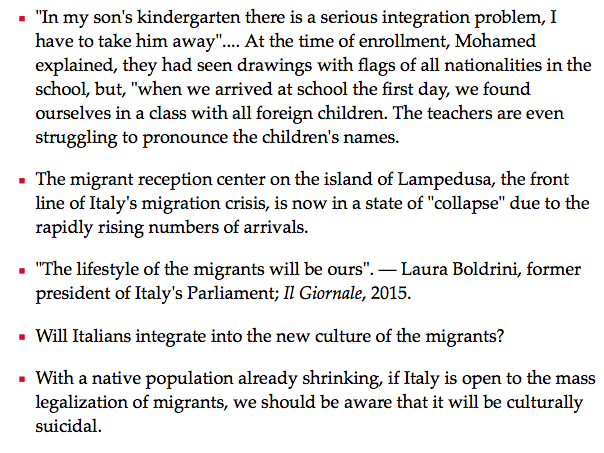 Gatestone According to projections from the UN Population Division, the population of sub-Saharan Africa will double in 30 years, adding an additional 1 billion people and accounting for more than half the global population growth between now and 2050. Italy, which already has the third-largest population of migrants in Europe, is undergoing an “unbearable” crisis, and now faces the real risk of an “Africanisation“, as Stephen Smith called it in his book, The Scramble for Europe.

There are many voices of concern. Cardinal Robert Sarah, author of a new book, The Day Is Now Far Spent, about the crisis of the West, compares the current influx of migrants to the invasions of barbarians that brought down the Roman Empire. If Europe’s policies toward migrants do not change, Sarah warns, Europe will be “invaded by foreigners, just as Rome was invaded by barbarians.”