“We are going to slaughter you,” says 10-year-old jihadi to British reporter in a Syrian camp filled with thousands of ISIS brides/widows and their children, which has turned into a ‘mini Islamic caliphate.’ 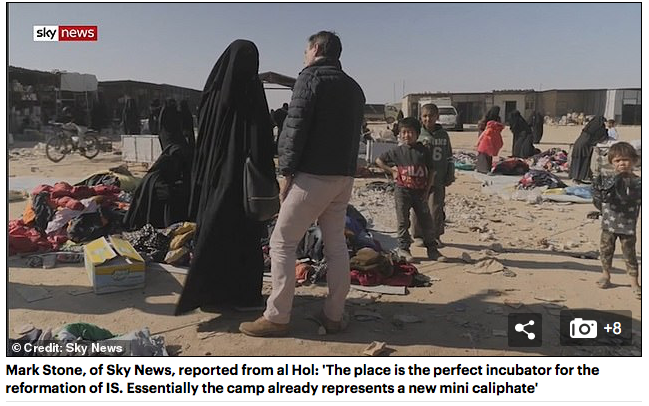 Daily Mail A camp full of ISIS brides and their children has turned into a ‘mini caliphate’ despite the death of its leader Abu Bakr Al-Baghdadi in a US raid last month.

More than 70,000 people, mostly women and children, are kept at al Hol in northeast Syria and thousands of them are suspected ISIS fighters’ families. The Turkish invasion has depleted the Kurdish guards. Stabbings are common and there have been several murders.

‘We’re going to kill you by slaughtering you. We will slaughter you.’ A ten-year-old boy told Sky News. ‘God says, “Turn to Allah with sincere repentance in the hope that your Lord will remove you from your ills.”‘

Children, many of them European, walk through the squalid camp with nobody but their radicalised mothers to seek guidance from.

Another, from Paris, seemed equally unfazed, telling Sky News: ‘We believed in him so we came [to the caliphate] … And here we are. Anyway he is dead. You know in Islam there is life after death. Another one will return.’ Asked whether the Islamic State would return, she replied: ‘God willing.’

Not far from al Hol many thousands of former ISIS fighters are held in cramped jails by the Kurds.

Mark Stone, of Sky News, reported: ‘The place is the perfect incubator for the reformation of IS. Essentially the camp already represents a new mini caliphate.’  In the foreign section the guard said there were around 10,000 people, though no accurate records exist.

U.S.-born ISIS bride, Yoda Muthana, who urged jihadists in America to ‘go on drive-bys and spill all of their blood’ says she deserves a second chance as she pleads to return to the U.S. because life is hard in Syrian refugee camp with her son