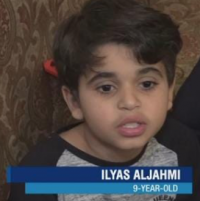 In the original post at BNI, we learned that the 9-year-old Muslim student mouthed off at a school employee, who punished him by making him sit in the cafeteria during the lunch break among students who were eating, even though he was allegedly fasting for the month-long Ramadan, where Muslims don’t eat from sun up to sundown. (FYI: Children are never required to fast during Ramadan)

ORIGINAL REPORT: BROOKLYN SCHOOL LUNCH AIDE TO MUSLIM BOY: “You will sit in the cafeteria with all the other kids during lunch break while you are fasting (needlessly) for Ramadan

The New York chapter of designated terrorist group CAIR (Council on American-Islamic Relations) has filed a civil rights complaint against the New York City Department of Education for its lack of action ton what CAIR likes to call “faith-based administrative bullying of a nine-year old Muslim student.”

According to the complaint, a Public School 264 (P.S. 264) employee weaponized Zaman Mashrah’s nine-year old son’s Muslim faith to punish him for allegedly laughing and mocking the employee during a lunch break.

Specifically, on May 14, 2019, during Ramadan while Mashrah’s son was fasting, the school employee informed the child that since he was laughing “you must sit in the cafeteria and watch all the kids eat while you are fasting!” As her child was forced to watch the non-fasting students eat their lunch, Mashrah’s son felt humiliated and ostracized for his religious practices.

Mashrah’s son wept in his mother’s arms and broke down in tears as he recounted the bullying incident to the principal. Despite immediately reporting the incident, the school employee was not punished and continues to be employed at P.S. 264.

Mashrah transferred her child to a different school because he no longer felt safe at P.S. 264.  Her son has been traumatized and no longer wants to openly express or show his Muslim faith at school.  (Good! Religion, especially Islam, has no place in a public school)