An apology to immigration critics and a proposed change of course from Ulf Kristersson, the leader of one of Sweden’s largest parties, has sparked mixed reactions. While some felt avenged, others perceived this as mere politicking. 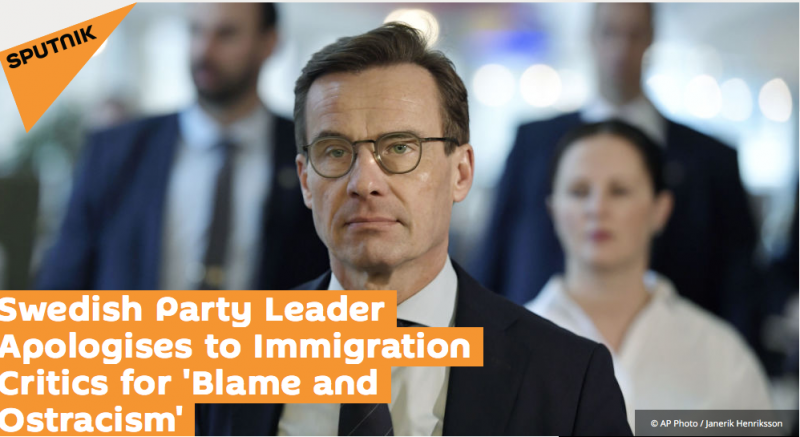 Sputnik News (h/t Sara S) After years of criticism, Ulf Kristesson, the leader of the liberal-conservative Moderate Party, has apologised to immigration critics for the unfair treatment they’ve received in a lengthy Facebook post.

According to Kristersson, this negative development “could have been foreseen”, and many voiced their immigration concerns in the 1990s.

“The problems of high immigration and poor integration – coupled with the long-term risks of deep exclusion, strong social tensions and serious crime – have been highlighted by many and in a constructive way. So the developments have been very predictable. However, too many politicians have overlooked this for too long”, Kristersson wrote.

By Kristersson’s own admission, his party “should have acted earlier, clearer, and more powerful”. “Looking back and learning from mistakes and errors is thus necessary. But not enough. One must also take responsibility through clear political review and concrete action”, Kristersson wrote.

Many welcomed Kristersson’s change of rhetoric.

“Feels very good to me and other Moderates who were strongly critical during the Alliance years and received a lot of internal criticism for this”, MP Jan Ericsson tweeted.