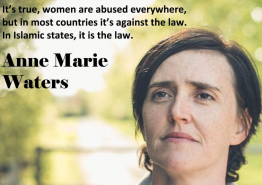 Controversial anti-Islam activist who campaigns against sharia law and mass Muslim immigration left the UKIP party (which had grown too soft on Islam) to form the ‘For Britain’ party is under fire for saying that “Islam is a killing machine.”

BBCA former Labour Party activist, Waters set up a UK branch of anti-mass immigration organization Pegida. Waters campaigns against sharia law in the UK and has been attacked for calling Islam “evil” and a “killing machine.”

She founded Sharia Watch UK, which aims to “to document the advancement of Sharia law in Britain,” in 2014. She hit the headlines a year later when she announced plans for an exhibition of cartoons of the Prophet Muhammad, but was forced to cancel the event after police warned it could be “a risk to public safety”.

She has argued that UKIP could regain support if it had the “guts” to be “honest about Islam” and challenge the view that it has “nothing to do” with jihadist violence.