An IDF reservist who was invited to speak at York University: “Dialogue? Not a chance.” A mob of pro-Hamas Muslim activists assaulted students trying to attend a pro-Israel event at York University in Toronto on Wednesday. 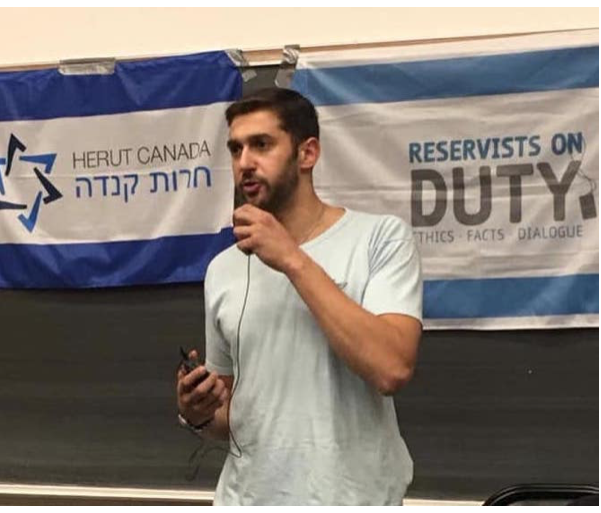 Times of Israel I could hear shouts of Vivé Vivé intifada,” alluding to the armed terrorist uprisings that took the lives of over 1,000 innocent Israelis during the early 2000’s. The scene was York University in Canada, where I had been asked by Reservists on Duty to speak with four other former soldiers about my experiences in the IDF.

Hundreds came out to protest our presentation. They demanded that the University ban Israeli soldiers from speaking on their campus. Given mandatory inscription in Israel, what they were effectively requesting was the silencing of an entire group of people on the basis of their country of origin.

The protestors alleged genocide, occupation, and apartheid, and refused all attempts at dialogue, preferring to chant slogans and wave flags. Intermittent acts of violence marred the event; as we spoke, we could hear the protestors shouting outside the doors of the auditorium. 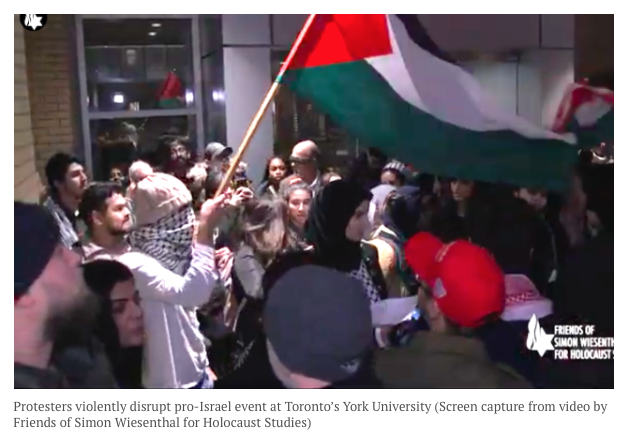 Thanks to the presence of 20 armed police and several anonymous groups that stood between us and those seeking to disrupt the event, we were able to address an audience of about 100 people about our experiences in the IDF, and the truth about many of the false claims being shouted by the crowd. We engaged in honest dialogue with several well-meaning Palestinian supporters and shared our experiences with an engaged crowd.

Throughout the evening, I and the four other soldiers approached people waving Palestinian flags and tried to facilitate dialogue. Three times during our presentation, protestors who had hidden themselves within the event stood up and began chanting “End the occupation.” In all cases we tried to have a conversation with those that had sought to disrupt our event- not a single one of them even acknowledged our presence.

They continued chanting as they were escorted out by security. The only person that evening who responded to my question, “What occupation?” shouted back confidently: “The Israeli military occupation of Gaza!” Israel pulled all of its citizens and the military out of Gaza in 2005; I wondered how many others in the crowd were equally uninformed. But informed dialogue is not the only thing that appears to be missing at York University. Equally troubling is the absence of the Administration’s condemnation of incitement and hate speech.

Daily Caller The protesters, members of the Students Against Israeli Apartheid campus group, can be seen attacking students as they attempt to enter the event, according to footage obtained by the pro-Israel BDS Report. Accusing Israel of being an apartheid state is a common theme in anti-Semitic attacks on Israel.

In the year 2019, nearly 75 years after the Holocaust, in a Democratic Country, it is once again dangerous to be Jewish. In an event organized by a Jewish student group, less than a dozen students turned up among the nearly 100 attendees – we were informed by those that came that the other students were scared to be seen at the event and be labeled as Jewish, or as Israel supporters. One student told us that though he wore a kippah to classes, he was often scared for his safety.

In one of the many skirmishes that occurred that evening, I was shoved sideways, and as my head was contorted down towards the ground, I saw a book that must have been dropped by a student, which was promptly trampled by the crowd. I watched as several pages were ripped out of it before the surging crowd moved me once again, and it fell out of view. As I struggled to regain my footing, all I could think about was Heinrich Heine’s 1823 prophecy that where books are destroyed, in the end, people will be as well. 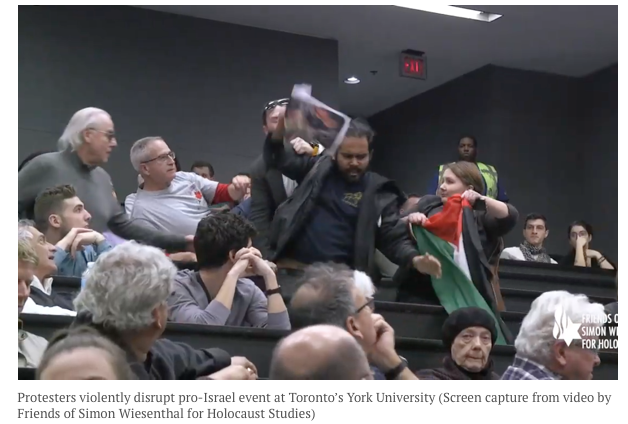 While no books were burned on Wednesday night, freedom of speech was unapologetically attacked while the administration did nothing to stop it. If history has taught us anything, it is that if hatred is left unchecked, it will not stop at words. StandWithUS and Hillel both refused to support the event, citing security concerns. To the leadership of these organizations – I fear that you, too, have forgotten the lessons of history.

From the ashes of the Holocaust, the Jewish people rebuilt, and re-established their historic homeland in the land of Israel. They fought off six invading armies on the first day of their independence, and have never stopped standing up to those who threaten their right to exist. Israel did not refrain from declaring statehood because of security concerns. The thousands of men and women that took up arms to defend their new country made a conscious decision that the right to live freely in a Jewish nation was worth whatever it might cost.

Reservists on Duty came to York to represent that ethos. We came to speak the truth, dispel false accusations, and to remind the Jewish community of our proud history of standing up for what we believe in, even when it’s not easy, and even when it’s dangerous. The actions of these organizations fly in the face of the very ethos on which Israel was built. As Ben Franklin once said, “Those who would give up essential Liberty, to purchase a little temporary Safety, deserve neither Liberty nor Safety.” 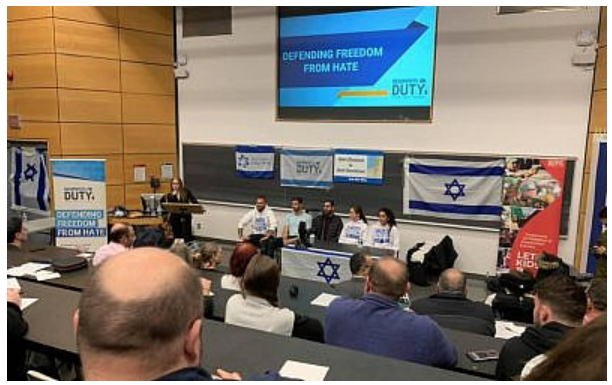 DePaul professor Dr. Jason Hill is facing massive protests and has been censured for an op-ed he wrote supporting the state of Israel.