Department of Defense spokesman Jonathan Hoffman said in a statement: “Secretary of Defense Mark T. Esper has asked for the resignation of Secretary of the Navy Richard Spencer after losing trust and confidence in him regarding his lack of candor over conversations with the White House involving the handling of Navy SEAL Eddie Gallagher.” 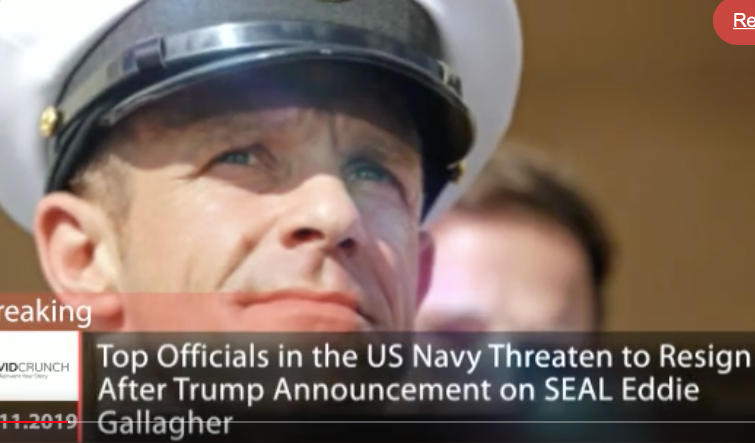 “I am deeply troubled by this conduct shown by a senior DOD official. Unfortunately, as a result I have determined that Secretary Spencer no longer has my confidence to continue in his position. I wish Richard well.”

100percentfedup  Leaders of the Navy SEALS, Navy Secretary Richard Spencer, and Rear Adm. Collin Green, left the DOD scrambling for a compromise with their latest objection to President Trump’s support for pardoned Navy SEAL Eddie Gallagher for the nonsense charge of posing for a photo with a dead Muslim terrorist’s body.

These US Navy officials threatened to resign or be fired should President Trump follow through with an order to keep Gallagher in the service, The New York Times reported.

Navy Secretary Spencer told Reuters “I believe the process matters for good order and discipline  I think we have a process in place, which we’re going forward with, and that’s my job.”

The Navy tried to take away pardoned SEAL Eddie Gallagher’s trident pin (which would have downgraded his rank and reduced his future pension to which he was entitled as a Navy SEAL).

The Navy wasn’t finished with Eddie Gallagher and decided to review his status as a SEAL and called him to appear before a review board. An “anonymous source” informed NBC News of the internal revolt against the president’s decision.

The official, who spoke on condition of anonymity, said Rear Adm. Collin P. Green, commander of the Naval Special Warfare Command, would issue an order Wednesday directing that a Trident review board be convened to determine whether to withdraw the emblem from Gallagher.

What they didn’t count on is that the Commander in Chief has the final say on this and he won’t put up with the poor treatment of a man who is a true American hero.