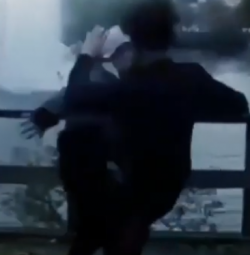 After a series of horrific racist attacks by Muslim child migrant gangs, the city of Gorkum in the Netherlands is now under high alert. These attacks on Dutch children, which occurred in the Gijsbert van Andel park, were captured on videos filmed by the migrants themselves and posted online, have spread through social media, showing up to twelve of the young Muslim thugs beating and kicking several white Dutch children.

You can see two of the videos here: NETHERLANDS: Moroccan Muslim thugs chase down and savagely beat up a Dutch youths for the fun of it

RAIR Foundation Mainstream Dutch TV news program, EénVandaag, reported on the Muslim gang attacks (though they never refer to them as Muslims, preferring to describe them as “young boys with a migration background.” This program not only whitewashed the problem, but they also seemed more outraged that the attacks were shared on social media than they were disturbed by the actual attacks themselves. Neither the police nor the media mentioned the ethnicity of the perpetrators.

Two Dutch conservative political leaders, Thierry Baudet and Geert Wilders boldly address the attacks, condemning the dangerous effects of Muslim immigration, as well as the complicit media and leaders in the Netherlands.

Dutch Politician, Thierry Baudet bodly condemned the racist migrant attacks in Gorkum in the Tweede Kamer (Netherland’s House of Representatives) and in the national media;

What this is about is that large groups of youths of immigration background, Moroccans, Turks, who take pleasure in hunting down white youths, beating them up, also other people, such as people with a homosexual orientation, of Jewish background; those are the minorities who are really in danger in our society nowadays. It’s getting less safe, and people won’t face up to this.

Dutch MP Geert Wilders, the Donald Trump of the Netherlands and his political party, PVV (Party for Freedom), released a powerful video addressing Gorkum. Wilders strongly condemned the racist attacks against the white native Dutch children and issued a powerful call to action.

Arrest these scum! Throw them in prison! And if they have dual nationality, then we’ll throw them out of the country, after they have served their sentence. Together with their families. Get out of here! They don’t belong here. The same way the multicultural society’s racist violence against white Dutch people doesn’t belong here.