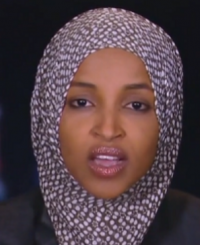 Omar sees fit to compare President Trump to a mob boss, despite the fact that her poor command of the English language makes it difficult to figure out what she’s trying to say. But the simpatico relationship between the lowest rated cable news network and Omar, one of the lowest IQ congress members, is truly a sight to behold.

BizPacReview Never mind that the radical freshman Democrat has a rather unaccomplished record thus far as a lawmaker, other than hating on the president. Omar is also dealing with a number of controversies involving her personal life, be it allegations of immigration fraud by marrying her biological brother, potential tax fraud, concerns over campaign fund violations and a reported extramarital affair involving a political consultant.

In comparing the President to a mob boss, Omar said “I think there are other opportunities, but right now we have a clear case, and I believe that we should follow this one.” “You know, I’ve used examples where you’ve had mob bosses who have committed atrocity after atrocity, and have violated our criminal codes of conduct, and we got them on one narrow case. But they get to serve time.”

Congresswoman, it sounds like you are artfully making a comparison on the legal precedent to this president and Al Capone?” “Yes,” Omar answered with a smile, stopping short of thanking the host for the assist.