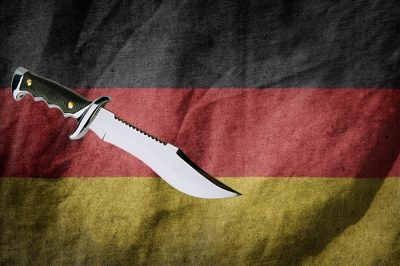 In the first half of 2019, there already were 2,883 registers knife attacks involving young people. Of course, this is a German report, so we don’t get any information about the identities of the majority of perpetrators. But if you look closely (see video at end), even though their faces are blurred, you can tell that most of the violent encounters involved Muslim migrants.

Gatestone Institute A review of German police blotters found that 2018 was a record year for stabbings and knife crimes in Germany: Police reported more than 4,100 knife-related crimes in 2018, compared to around 3,800 reported during 2017 — and only 400 in 2008.

Overall, during the past ten years, knife-related crimes in Germany have increased by more than 900% — from one a day to more than ten a day. The data shows a notable increase in knife crimes since 2015, when Chancellor Angela Merkel opened German borders to hundreds of thousands of migrants.

German media do not report most knife-related violence. Crimes that are reported are often dismissed as “isolated incidents” that are unrelated to mass immigration. Moreover, many crime reports, including those in police blotters, omit references to the nationalities of the perpetrators and victims — apparently to avoid inflaming anti-immigration sentiments….

Knives, axes and machetes have become weapons of choice for criminals in Germany, which has some of the strictest gun laws in Europe. People armed with knives, axes and machetes have brought devastation to all of Germany’s 16 federal states. Knives have been used not only not only to carry out jihadist attacks, but also to commit homicides, robberies, home invasions, sexual assaults, honor killings and many other types of violent crime.

Many Germans have the sense that danger lurks everywhere, but the lack of official statistics seemingly allows German authorities to pretend that the problem is imaginary.

Some of the recent stabbings appear to have had religious or political motives, sometimes both: