Troy Maxham, a resident of Roxbury, Vermont, who selflessly served the country sees his country being infiltrated with the fundamentally violent ideology of Islam. As a result, he placed a homemade sign outside of his house in early March, declaring his property a:

MWNews (h/t Mike F( Like clockwork, socialist Democrats came out in full force, calling Roxbury police to complain about the cardboard display hanging in his front yard. Hoping authorities would make Maxham take down the sign, they were left aghast when police told them it’s considered free speech protected by the First Amendment, according to the Times Argus.

In a shamefully contradictory letter to the newspaper’s editor, Regina Logan explained that she was deeply offended by the three words and that she believes it shouldn’t be allowed within public view.

Ironically, it must’ve slipped Logan’s mind that one of those “American values” of which she speaks is freedom of speech, a protected right that doesn’t exist under Islamic law. Also, it’s safe to say that this offended leftist has no idea that Islam is not only a religion but a political and militant legislature, which directly contradicts our own Constitution and American values.

Local Democrat Rhett Williams said that he had made up 50 “Tolerance & Respect” signs and had handed out 15 to other residents in an attempt to battle Maxham’s hurtful words.

In the dead of night, one of the snowflake neighbors removed the sign. However, Maxham responded in an epic way. He put up another sign, this time fastened to the wall with plumbers tape and screws! With signs, “Still A Muslim Free Zone.” 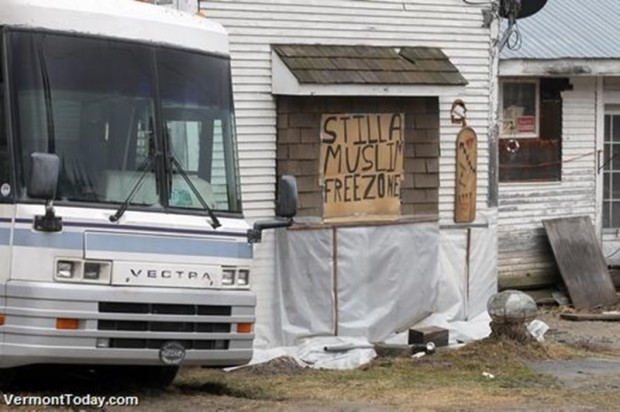