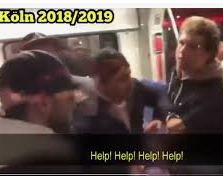 From New Year’s Eve 2018/2019 in Cologne: Several German citizens are nervously waiting for a train while gangs of Muslim invaders are running around shouting “Allahu Akbar” and setting off firecrackers in the underground station’s stairwells, trashcans, and platforms, while also damaging property and scaring people.

One bleeding heart German woman accuses the man recoding the chaos on his phone as a “Nazi” but the group is getting more and more anxious as the explosions keep increasing. Some of the Muslims started calling the Germans “Dirty Nazis” because they were complaining. When the train finally pulls into the station, a fight breaks out between the Muslims and Germans and a young girl gets hurt. No sign of any police, even after 12 minutes of this.

UPDATE: And this is how the Muslim invaders in Germany celebrated New Year’s Eve this year:

This is how Merkel’s migrants celebrate New Years Eve. With pistols on the street & burning cars.

Tolerance of the intolerable has crucified Germany.