Muslim convert says she was sent home after she refused to remove her hijab for work at Chicken Express in Texas. The woman, who converted to Islam in August, started working at the restaurant in October but only debuted her hijab this week. 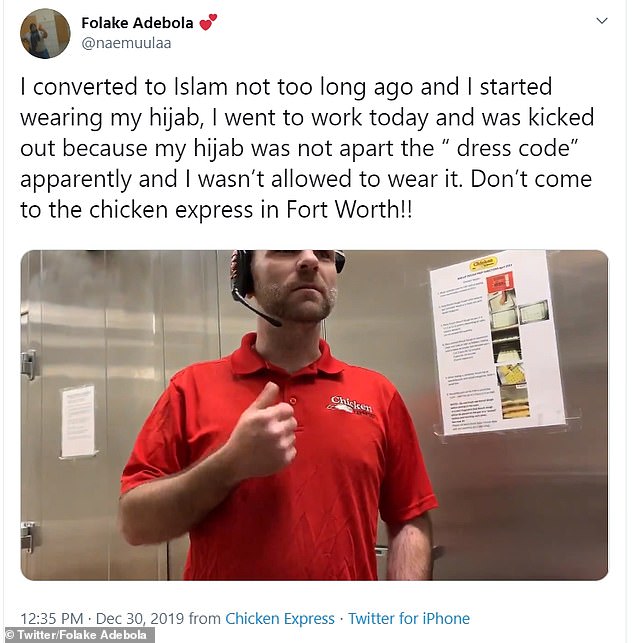 Daily Mail A fast food restaurant employee has shared footage of her boss telling her not to wear her hijab to work before she says she was sent home for refusing to remove it. Stephanae Coleman says the manager at Chicken Express in Saginaw, Texas took issue with her Monday after she arrived at the branch wearing the Islamic supremacist head covering.

In a video recorded by the employee, the 1212 Blue Mound Road branch manager is seen reprimanding the 22-year-old woman who recently became a Muslim, telling her that she can’t wear the scarf because it’s not part of the uniform. ‘Your job is your job. Your job has nothing to do with religion,’ the manager says in one video.

The job requires a specific uniform. [The hijab] is not a part of the uniform; you as a paid employee cannot wear it,’ he adds in a second clip which the woman said was from when he called her into the office after speaking on the phone with the area coach.

The woman – who goes by Folake Adebola on Twitter, converted in August and started working at the restaurant in October. She only debuted her hijab this week after a set she had ordered arrived.

‘I converted to Islam not too long ago and I started wearing my hijab, I went to work today and was kicked out because my hijab was not apart the ‘dress code’ apparently and I wasn’t allowed to wear it,’ she posted on Twitter. ‘Don’t come to the chicken express in Fort Worth!!’ She added in another tweet: ‘This is discrimination at its finest! I will not tolerate this at all.’ (Good, now go find a job in a halal-compliant store)

The woman said: ‘I told my manager that I am Muslim and that I was waiting on my hijabs to come in. And everything was cool until it was brought up again between him and another employee.’ ‘Once I clocked in, the manager said ‘Take off anything that doesn’t involve Chicken Express,’ which I knew he was talking about my hijab,’ the woman told CNN.

‘So I didn’t react, I just went to the back and took off my jacket and my purse. Five minutes later, he called me into the office telling me that I have to take it off because it’s not a part of the work uniform.’ Coleman claimed the manager said: ‘If it isn’t branded by Chicken Express you can’t wear it, we don’t care about your religion because it has nothing to do with the store.’

The company’s handbook states that ‘only the Chicken Express hats or visors may be worn’ but does not include guidelines on religious exceptions. 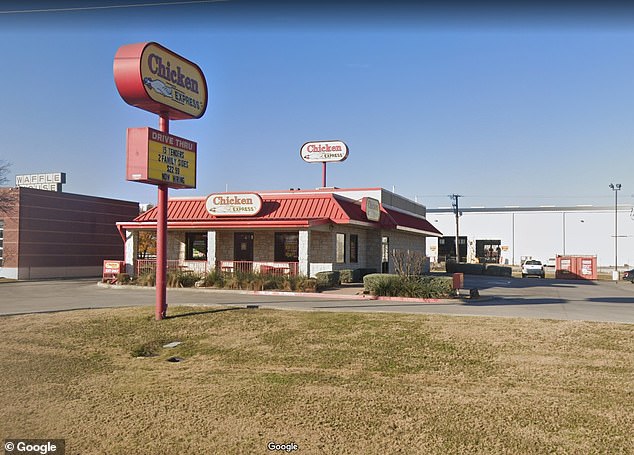 Coleman reached out to the litigation jihadists at Council on American-Islamic Relations (CAIR) with the videos for advice on filing a lawsuit and Equal Employment Opportunities Commission now has her case.

(DING DING DING!) It’s not about the hijab, it’s all about the money.

Many called for the offending manager to be fired and for Chicken Express to settle a lawsuit quickly, citing Title VII of the 1964 Civil Rights Act about practicing religion at work.