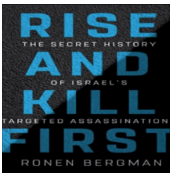 “If someone is coming to kill you, rise against him and kill him first.” That is exact scripture from the Old Testament, or the Torah. And now it’s also the inspiration for the title of a new HBO TV series coming out of Israel.

Apparently, Donald Trump has adopted this scripture in his dealings with Islamic terrorists.