‘Apostate Prophet’ makes a good case for why the playing of the eardrum-shattering, overly-amplified and highly offensive Muslim Call to Prayer, which can be heard from a 20- block radius, should be banned in every civilized nation. 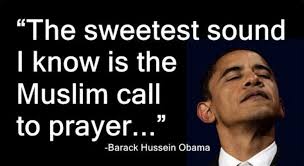 The Call to Prayer is a guttural blaring that is a war cry to let every “unbeliever” know Islam is superior to every other ideology and deserves special privilege. Just as “Allahu Akbar” is a declaration to unbelievers that “Allah is greater, and we’re about to show you just how much greater he is,” more and more Western cities are allowing the Call to Prayer to be blasted from large amplifiers five time a day, beginning at dawn.

Despite countless complaints from neighbors to police, the loud and offensive Muslim Call to Prayer is still being played in Brooklyn, NY.

The Gothamist reports that hundreds of residents near the border of Queens and Brooklyn are complaining that the Masjid-al-Amana is “too, too noisy,” citing the raucous Azan (Muslim Call to Prayer) that blasts from the mosque’s speakers 5 times a day. Beginning at the break of dawn, the Islamic call to prayer jerks the community out of sleep, reminding them that “Allahu Akbar” means “our god is greater than your god, your country, and your laws.”

As the all-too-willing Leftist bleeding hearts advocate for open borders and more Muslim refugees, while protesting Trump’s Muslim Travel Ban, they are finding out that their progressive utopia isn’t the goal of their favored Muslim minority. In fact, Europe News reports that Brooklyn residents have filed 156 complaints to police about the noise levels at the mosque, yet authorities have issued no fines, proving the religious group has special privilege.

NOISE POLLUTION 5 times a day emanating from a mosque on Broadway & 29th Street in mid-town Manhattan.

Here is the Muslim Call to Prayer from the Masjid At-Taqwa mosque at 6AM in the morning in a densely populated neighborhood in Brooklyn, NY at Fulton Street and Bedford Avenue.

The neighbors are complaining to no avail

And here’s the Call to Prayer from a Brooklyn mosque at Church Ave. and Chester Ave. There’s a ‘NO HONKING’ sign outside the mosque but nothing about the screaming Muslim prayer that begins at 6:00 AM.

The mosque’s 5-times-a-day Call to Prayer schedule for the first week in January: