In an article called “The Scourge of Islamophobia,” Muslim writer Maz Saleem alleges, “In the space of just a couple of decades (so-called) Islamophobia has become the bane of western societies. In Britain, its incidence has soared as it has become embedded in the very core of our institutions.”

Islamic Human Rights Commission  Islamophobia is anti-Muslim racism (What “race” is Islam???) which manifests itself in an exaggerated fear, hatred, hostility and rejection towards the Islamic religion and Muslims, perpetuated by negative stereotypes.

When these result in bias, discrimination and the marginalization and exclusion of Muslims from social, political, educational institutions and against the civic lives of Muslim individuals and communities, it is called institutional “Islamophobia.” (“Islamophobia” is a word made up by the Muslim Brotherhood to silence all criticism of Islam)

In line with the definition of institutional racism employed by the Stephen Lawrence Inquiry institutional “Islamophobia” consists of the collective failure of an organization to provide an appropriate and professional service to people because of their Muslim background or faith. It can be seen or detected in processes, attitudes and behaviour which amount to discrimination through unwitting prejudice, ignorance, thoughtlessness, and stereotyping which disadvantage those perceived to be Muslim.

Even pre-9/11, Muslims were widely viewed as different and as a threat to national security.  However, as the report also highlights that Islamophobia and institutional Islamophobia have increased exponentially over the past two decades. (It couldn’t have anything to do with the more than 36,000 deadly Islamic terrorist attacks that have taken place around the world since 9/11, now could it?)

There are several areas in which institutional Islamophobia manifests itself in the UK. Most prominent of these is anti-terrorism legislation.

Under the controversial Schedule 7 counter-terror law, Muslims are being detained in disproportionately high numbers at ports and airports according to the human rights group CAGE. In the 20 years it has been in operation approximately half a million people have been stopped under this power. (Good job!)

Muhammad Rabbani, International Director for CAGE, says: “The discrimination faced by Muslim travellers highlights how embedded Islamophobia is in Schedule 7, and in broader counter-terrorism powers. Officers routinely ask intrusive questions about religion and practice, which amounts to a modern-day inquisition.” (We like to call it keeping us safe from Muslim terrorists)

“Over the last decade alone, Schedule 7 has seen over 400,000 people stopped, 99.993% were  innocent of any wrongdoing (It only took 19 Muslims to bring down two 110-story buildings). This highlights the disproportionate use of the power and illustrates its abuse with devastating consequences for thousands of people. The practice amounts to the most exhaustive racial profiling strategy witnessed in modern times.” (“Racial” as in what “race” is Muslim?)

PREVENT is another sinister social engineering programme that seeks to eradicate views and beliefs of resistance within the Muslim population. Ever since its introduction in 2003 PREVENT has focused its attention primarily on Britain’s Muslims and has probably done more than any other policy or law to entrench their status as “problematic” citizens. (No, Muslims do a fine job of doing that to themselves) It has been widely criticized (by Muslims) for spying and infiltrating Muslim communities, browbeating and financially inducing them to become compliant and assimilated.

In 2015 the Counter-Terrorism and Security Act widened the scope of PREVENT even further, placing a duty on specified institutions and authorities to be vigilant and show “due regard to the need to prevent people from being drawn into terrorism.” As a result, nearly two million public sector workers are trained to spy on Muslims for signs of extremism. (Obviously, it’s not working, as Muslim terror attacks continue to occur in the UK on a regular basis)

Most Muslim feel its aims within educational institutions is to disarm Muslim children and adults politically and stop them from speaking out. (Not speaking out, acting out)

Education is another area in which institutional “Islamophobia” is pervasive

The National Education Union (NEU) says the normalization of anti-Muslim racism (Islam is NOT a race so there is no such thing as anti-Muslim “racism”) must not be allowed to blight and affect the lives of Muslims, and everyone perceived to be Muslim.

Young Muslim children in the UK say they have been called “terrorists” at school and been told by strangers to take off their headscarves (Virtually every child in school gets called names at some point. And when they come to school dressed as freaks, someone is bound to try and remove the offensive garment). In 2018 alone, according to government figures, religious hate crime increased by 40% across the UK, with more than half directed at Muslims. (NOT  TRUE. Most of the hate crimes are directed at Jews. But don’t let facts get in the way of your Islamowhining)

In the NEU’s report ‘Barriers’ teachers talked about how “PREVENT is so strong that teachers feel that disagreeing with them is seen as condoning extremism and there is pressure to ‘watch’ Muslim students and their work.” (As there should be)

High referral rates according to the NEU ‘could be a sign that teachers are misreading the signs of radicalization or they are being overcautious or using a form of profiling. However, a referral can mean long term stigmatization and trauma for the child’. (Well, that’s the price you pay for continuing to include acts of terrorism (jihad) as an inherent part of your so-called religion)

In the aftermath of the 9/11 terrorist attacks, the sustained intensity of media coverage of Islam and Muslims resulted in an almost universal distorted awareness of Islam and its beliefs. (The ONLY distortion perpetrated by the media is that “Islam is a religion of peace”) 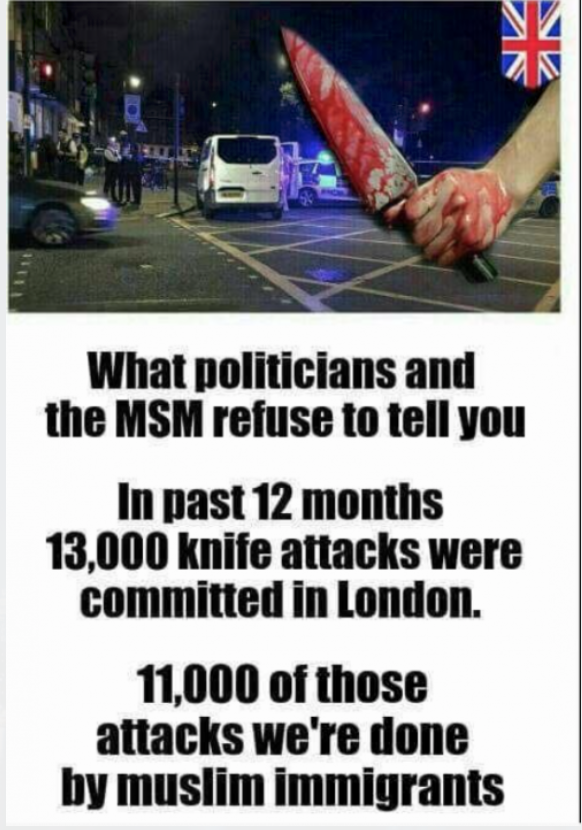 Research has shown that Western media coverage of terrorism is often based on “Islamophobic” assumptions. Islamophobia in the Western media is increasingly spreading to other parts of the world, which rely on Western news outlets, yet have little everyday exposure to Muslims.

In the UK, there are many examples of news headlines and coverage that could potentially instill fear and the possibility of ‘otherizing” Muslims. Mainstream newspapers such as The Daily Express, The Sun and The Times, the Daily Mail have run offensive headlines, including “Ramadan A Ding-Dong”, “Christianity Under Attack”, “Muslims ‘Silent On Terror’”, “Britain Goes Halal… but Nobody Tells Public’’, “1 in 5 Brit Muslims Sympathy For “Jihadis” and others. (Thank goodness that a few media outlets, unlike the state-run BBC, have the guts to tell the truth about Muslims)

Since the war on Islamic terror, the representation of Muslims in the media is as a domestic terrorist threat. Immigration, the niqab/burqa, and forced marriages have bene used as tools to portray Muslims as ‘foreigners’, and ‘outsiders’ (They ARE, and their Islamic supremacism makes them happy to be perceived that way). The Muslim paedophile sex grooming scandals tag all Muslim males as predatory.  Mosques and madrasas are regularly represented as ‘problematic‘ and incompatible with British society.(If the shoe fits…)

So-called “Islamophobia” in the Conservative Party

Prime Minister Boris Johnson has publicly humiliated Muslim women who wear the niqab and the burqa. Boris Johnson has faced much criticizm but he has still refused to apologize.   In 2014 he published a blatantly Islamophobic book “Seventy-Two Virgins – A Comedy of Errors” with references to “Islamofascists”, “Islamic headcases” and “Islamic nutcases” and a stereotypical suicide bomber plot. (One of the reasons he won the recent election in a landslide)

There have been an unprecedented number of cases that have been brought to the public’s attention, suggesting a culture within the Conservative Party where Islamophobia is not only widespread, but institutional.  The Tories have disgracefully ignored calls for an independent inquiry on anti-Muslim hatred and are failing to take action against so-called Islamophobes in the party such as MPs including Bob Blackman, Zac Goldsmith, Michael Fabricant and Philip Hollobone. (Good for them!)

The Muslim Council of Britain has repeated many times their call for an inquiry into Islamophobia in the Conservative Party.  And now, following a ridiculous number of Tory candidates, members and Councillors being suspended for anti-Muslim comments and abuse, Baroness Warsi has admitted that there were “weekly occurrences of Islamophobic incidents“ in the Conservative Party.

The so-called “racist” PREVENT duty needs to be scrapped as soon as possible because it has been a catastrophic failure. There is absolutely no evidence that PREVENT has actually prevented any act of “terrorism.” (And how would you know that?)

From the very start it has almost entirely focused on abhorrent racial profiling of Muslim communities (Oh, you mean where all the terrorism is coming from? What a concept). PREVENT has fuelled the perception that there is an inherent problem of “Islamic extremism” in the community. There also needs to a far-ranging public inquiry into Islamophobia all social and political institutions.

The government must give priority to educating people about Islam (DING DING DING! Is CAIR now operating in the UK) and its historical negative influence and contribution in the world. It must also demand better from the mainstream media.

MORE HERE: After the 2019 General Election, Britain’s Muslim minorities must brace themselves for worse to come