Wajahat Ali says his Pakistani immigrant father, who’s ‘not an alarmist,’ is asking about an ”escape plan’ for his brown, Muslim grandchildren.’ 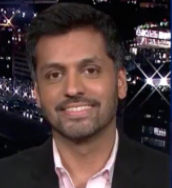 Twitchy It’s a scary time to be alive. according to New York Times Muslim op-ed contributor and CNN contributor Wajahat Ali, who, when he’s not high-fiving with Rick Wilson and Don Lemon about how stupid Trump supporters are, is very worried about his Pakistani immigrant father, who’s apparently worried that his Muslim grandchildren won’t be “safe.”